Ecuador's Elections Are Being Undermined by Foreign and Domestic Interference, Ex-Diplomat Explains 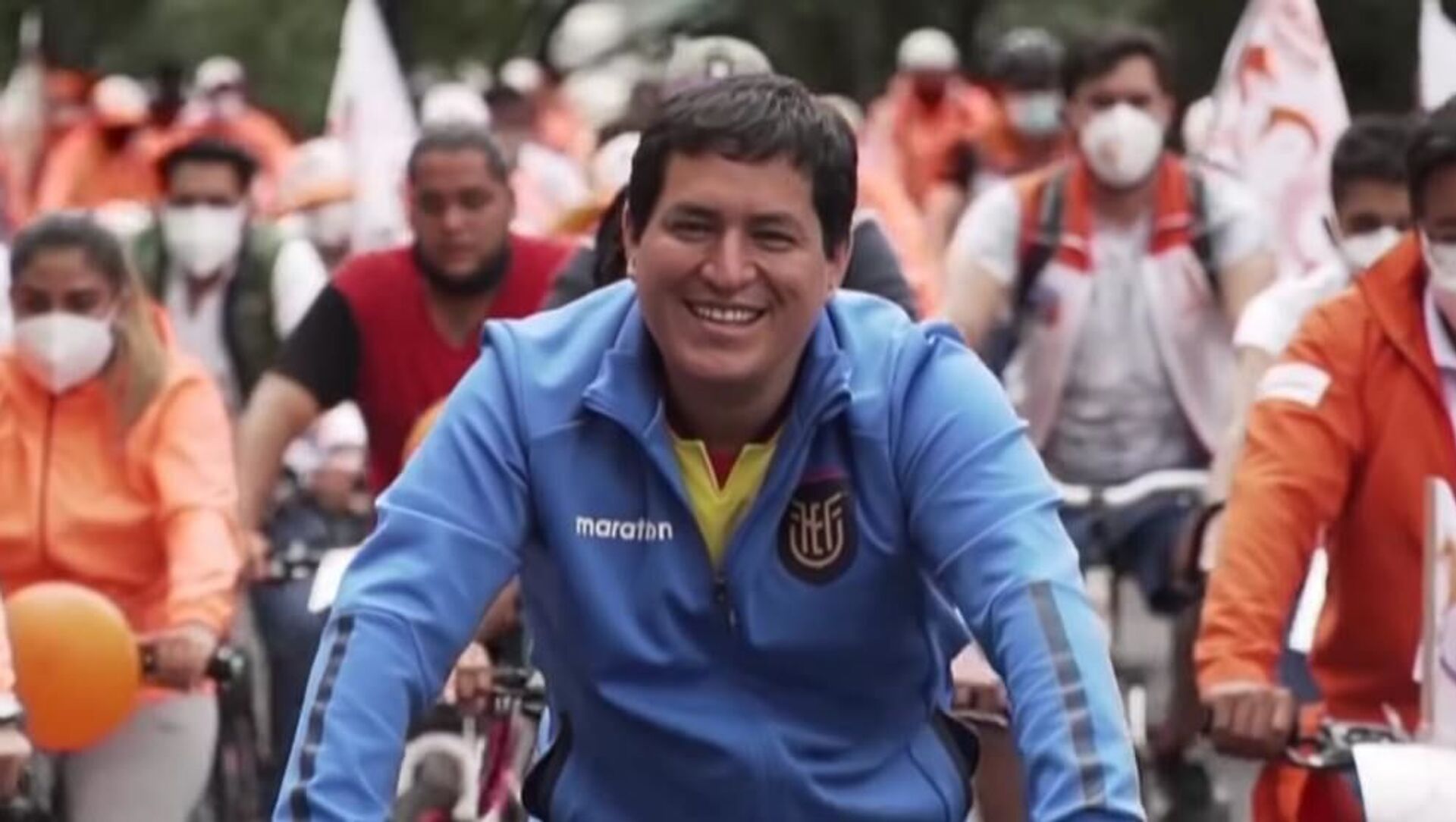 © Photo : screenshot
Subscribe
Mohamed Elmaazi
All materialsWrite to the author
Before the votes were fully counted in Ecuador's latest elections, one candidate received a phone call from the US embassy assuring him that he would be in the second round. Fidel Narvaez, a Ecuadorian diplomat, tells Sputnik that this is only part of what appears to be a concerted effort to undermine the election results.

Ecuador is due to have its second round of elections in April. Although the progressive candidate, Andrés Arauz, won by a large margin, he did not win by enough to avoid a runoff. However, the parliamentary results via the National Assembly are final, with the progressive candidates winning more seats than any other. The results of the presidential and parliamentary elections reflect an overall rejection of neo-liberalism by the Ecuadorian population at large.

Fidel Narvaez is the former Counsel and former first secretary to the Ecuadorian Embassy in London. Narvaez explains that attempts to undermine Arauz and the "Citizens' Revolution" which backs him, have only increased since the election, with clear evidence of foreign interference from countries like the US and Colombia, with the media also playing their part. Narvaez is a supporter of the Citizens' Revolution; Arauz is seen as someone who would break from the policies of President Lenin Moreno and return to the policies pursued by his predecessor, Rafael Correa.

Sputnik: Since we last spoke, right after  the general election polls closed in Ecuador, a clearer picture has emerged regarding the final vote tally. What were the final results?

Fidel Narvaez: Well, the final official results are already known. The progressive candidate [Andrés Arauz] has won confidently with 32.7 percent of the vote. Something like 13 points ahead of the second, who is the banker Guillermo Lasso, [who had] 19.74 percent. And [in third place]  is Mr. Yaku Perez with 19.45 or 19.48 percent. So, there's a very, very small, difference between the [candidates who arrived in] second and third [place].

Sputnik: And in relation to the National Assembly results?

Fidel Narvaez: The result is - for the progressive forces, winning it in a great deal. If you take into account that the Citizens' Revolution has 51 MPs, the indigenous movement has 26 and the social democrats have 17. That’s a clear majority in parliament. The conservative forces have completely lost the election.

For clarity, the parliament has a total of 137 assembly members, the results are as follows:

This presents a good opportunity to push forward a progressive agenda in Ecuador, only if common sense and ideological coherence prevails. However, we know that Pachakutik and the Social Democrats have been complicit and supporting Lenin Moreno’s government in the last four years, so there is a lot to work on in getting the right agreements in order to push forward a progressive agenda.

Ecuadorians Reject 'Neoliberal' Banker in Favour of Progressive for President, Ex-Diplomat Explains
Sputnik: One of the contenders, Yaku Perez, challenged the results, alleging electoral fraud and calling for a recount. Can you briefly describe what this was all about?

Fidel Narvaez: Mr. Perez has expressed disagreement with the results. He feels that he's been disfavoured and is asking for a recount. That's his right, there's the right of any candidate to challenge the results if they don't agree with them. But in order for a recount to proceed, the challenger needs to come out with some evidence or with some concrete elements to justify the recount. They have to point out what are the numbers they do not agree with. Where they think there has been a mistake or a fault. So if they do not provide that, then the legislation does not allow them just to ask to open any random ballots. So at this very moment, I understand, this is being presented by him. But at this moment we don't know to what extent the recount will proceed. We agree with any [review] that the legislation allows. Our worry is that this could be used as an excuse to delay, or postpone, the date of the second round [of elections] which is scheduled for the 11th of April.

Sputnik: Explain the attempts by government officials to confiscate the computer databases belonging to the electoral commission.

Fidel Narvaez: The Attorney General and the Comptroller General [who is supposed to audit finances in government departments] have requested access to the computer databases, and [their request] has been rejected by the electoral body. During the election time, the electoral body has special powers, it’s above anybody in the Ecuadorian state during the elections. Anybody who tries to interfere in the elections can be removed from their post by the electoral body. If they want, they can remove the Attorney General and the Comptroller General right now, because they have the power to do so. Though, of course, they haven’t as of yet.

Sputnik: What's next if they want to continue to try to do this? Can they try to get a court order?

Fidel Narvaez: Well, the point is that this is not a legal request. It's not in the Ecuadorian legislation for them to do so. So hopefully, that's the end of the matter. The point here is that the Attorney General and Comptroller General, two of the most sinister figures in Lenin Moreno's government, who have been responsible for the fiercest political persecution that Ecuador has known in modern history, clearly, clearly it's just an attempt, in our, opinion, to interfere with the election results.

Many other government representatives are showing desperation, [as they see] that the Citizens' Revolution is going to be back in power as a result of the democratic exercise of the Ecuadorian people. They clearly fear that when justice returns to Ecuador, they will face legal responsibilities for many human rights and other kinds of abuses.

Sputnik: How has the OAS dealt with the elections?

Fidel Narvaez: The first technical report form the OAS is fine. Andres explained it very well in an interview. He said we had met with the OAS before the election and we warned them very clearly that we are not happy at all with their role in what happened in Bolivia, which was political. We understand that the General Secretary may be engaged in politics but we asked you and trust you to be purely technical in respect of your election observers. In fact, the OAS delegation has expressed concerns about the General Attorney and Comptroller General attempting to seize the computer systems of the electoral body.

Sputnik: There have been concerns regarding foreign interference in Ecuador’s elections after the first round was complete. Who exactly is involved and how are they interfering?

Fidel Narvaez: Well, this is a good question. Any foreign interference is obviously concerted with the current government in order to impede us [from] winning the election. Immediately after the results of the first round, the Colombian Attorney General arrived in [the capital] Quito to meet the Ecuadorian Attorney General to discuss alleged information about alleged illegal financing of Andrés Arauz's campaign, originating from 'fake news' from Revista Semana in Colombia, which has been totally debunked, because it's obviously fake news. So, this is one example of Lenin Moreno's government trying to stop us from getting back into power.

[Another example of] fake news coming from abroad would be the one coming from Argentina alleging that Andrés Arauz has already been vaccinated against COVID, which is not true. It's also been debunked. Andrés Arauz visited Argentina in December 2020, when the vaccines hadn't arrive yet in Argentina. In fact, he managed get an agreement from the Argentine government to supply more than 4 million vaccine [doses] to Ecuador in the near future. And it's also publicly known that Andrés Arauz had COVID, during the Christmas period. So obviously the story about him being vaccinated [in Argentina] is fake news. We are facing examples like these on a daily basis, basically. This story came out right before the election but it keeps being referred to by Mr. Lasso, who says 'I don’t have the connections that Mr. Arauz has'. No, that’s fake. Right now there are a lot of scandals in Latin America of politicians skipping the queue [to get vaccinated]. In fact, in Ecuador, there is no queue. We don’t have vaccines. The very few that arrived went to private hospitals for the rich and the first vaccine went to the mother of the Minister of Health, which is appalling (this was publicly recognised by the Minister himself when he was questioned by the press).

Sputnik: How do we know Perez received this phone call?

Fidel Narvaez: Because he said it publicly.

Sputnik: Have the Ecuadorian press been repeating the claims you described from the Colombian and Argentine press?

Sputnik: On Tuesday and Wednesday (23 and 24 February) there were a series of killings in an Ecuadorian prison in an apparent gang war that left at least 79 inmates being killed, according to the BBC. My understanding is there are those who fear that this incident may be fuelled by attempts to overturn the election result. What could be the connection between this incident and the elections?

Fidel Narvaez: We are really concerned about the current government trying to use any excuse to stop the election from happening. They are so afraid; we believe they are capable of taking extreme measures. Let’s not forget what happened in Bolivia in 2018, when social violence ended up in a coup d'etat and the cancellation of elections that  Evo Morales had just one. The fact that such a violent event happened in different Ecuadorian prisons, something that had never before happened in Ecuador, could be used and could extend to violence outside prisons and get to an extreme scenario where the government could declare a state of emergency and basically either postpone the elections indefinitely or cancel them and call for a new one.

This might sound very extreme but it is something that we really should shine a light on. International observers shouldn’t see the Ecuadorian elections as just something that happened in February as the first round and in April the second round. There’s a concern that the incumbent Ecuadorian government is negligent in dealing with the situation. If a state of emergency is declared, this could be used to interfere with the elections. If you know what I mean

*This interview has been edited for clarity and concision.

** This article was updated at 9:27 GMT on 26 February 2021 to clarify the National Assembly results.

000000
Popular comments
Excellent interview.
vot tak
26 February, 11:58 GMT2
000000
Foreign interference? We all know that 'Lenin' (President of Ecuador) is a traitor to the Ecuador republic. The first and the second are left-wing inclined candidates in the latest election in this country. So that 'foreign interference' means the USA. Lenin 'the chair wheeling president' was the man that took Assange out of the Ecuadorian embassy in London.