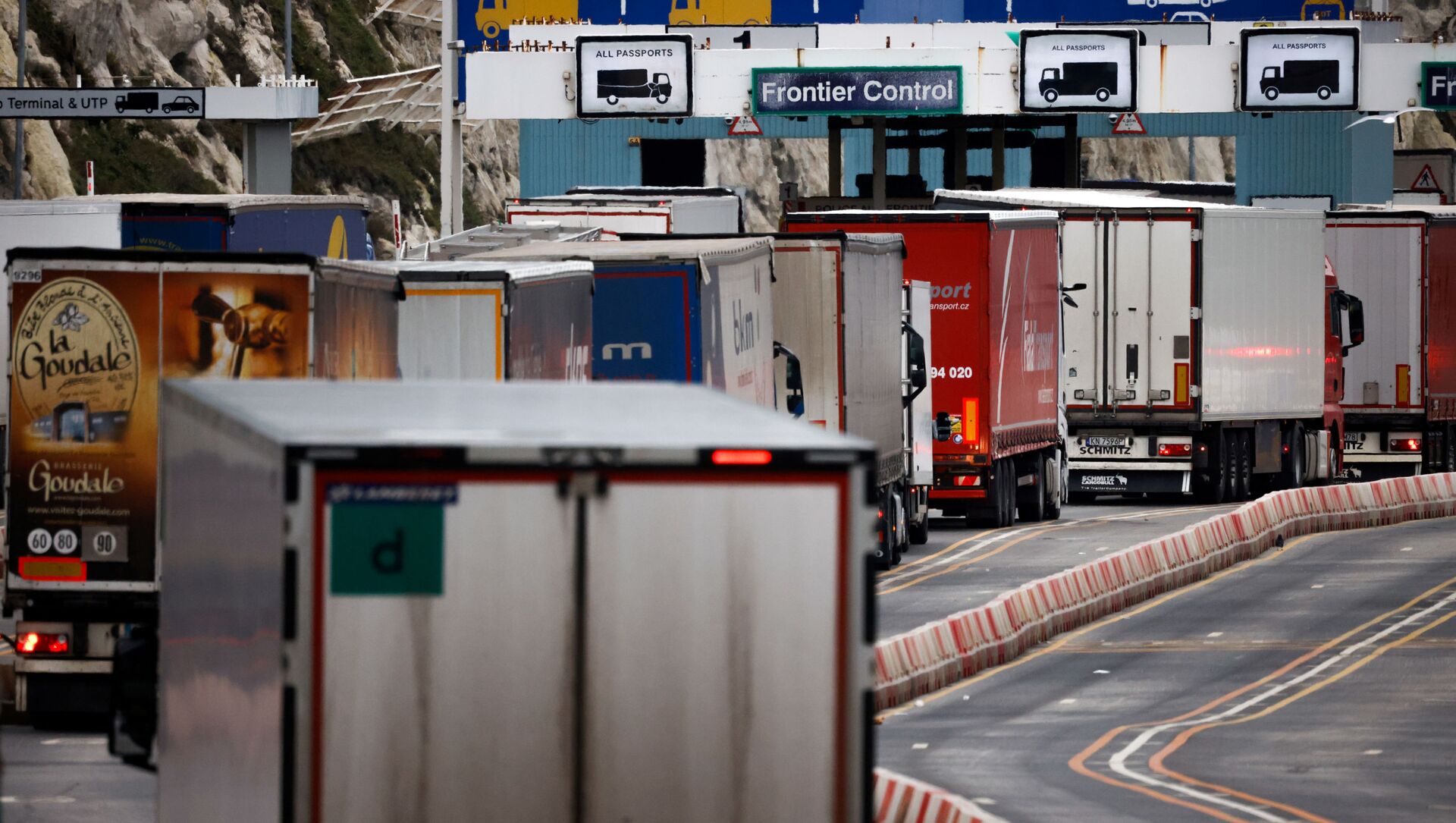 Aleksandra Serebriakova
Moscow-based Sputnik correspondent specializing in foreign affairs.
All materialsWrite to the author
The United Kingdom’s departure from the European Union has unsurprisingly put new strains on exporters from both sides with emerging paperwork and border controls, but the haulage industry was apparently not very prepared for the changes despite four years of negotiations between London and Brussels.

The UK government has rejected reports that there was a 68% drop in exports to the EU last month in comparison to the same period last year. The number was cited in a letter that the Road Haulage Association wrote to Cabinet Office Minister Michael Gove, according to the Observer.

In a letter dated 1 February, the RHA’s chief executive Richard Burnett cited a survey of overseas members when reporting on a staggering decline in the volume of goods transported to the EU from British ports over the past weeks, while maintaining that industry officials have repeatedly warned government executives in recent months about the upcoming difficulties, but their calls have fallen on deaf ears.

According to concerned exporters, the reported drop is attributed to increased inspections, onerous paperwork, and a lack of customs workers to help ease the situation for hauliers travelling through the Channel Tunnel.

But Whitehall disagrees that the problems are that severe.

“We don’t recognise these figures at all”, a Cabinet Office spokesperson told The Guardian over the weekend.

“We know there are some specific issues and we are working with businesses to resolve them”.

According to government sources cited by The Guardian, freight flows were “up to 95% or even 100% of normal levels on some days in January”. 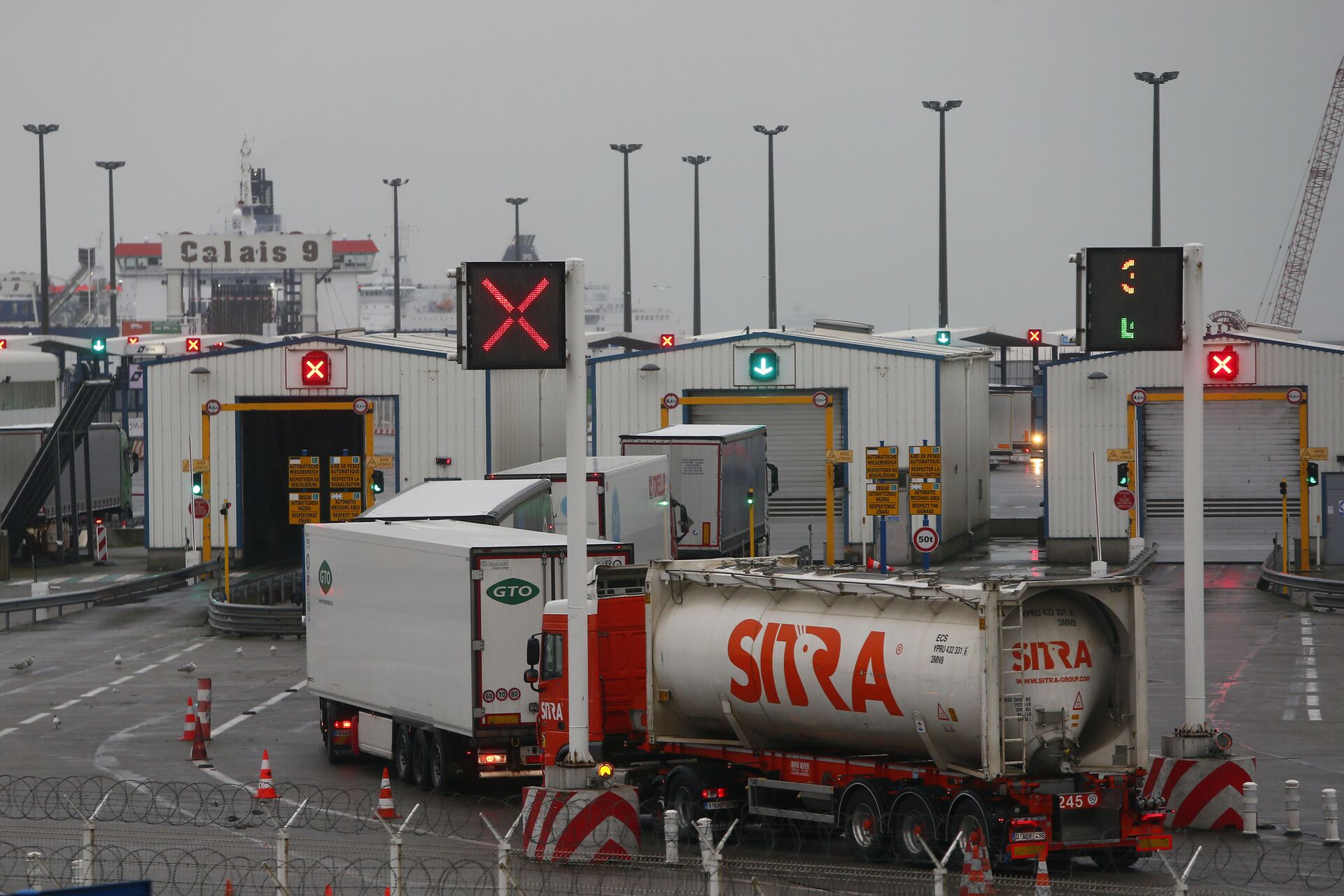 Trucks heading to Britain wait a the check point in the port of Calais, northern France, Monday Jan.4, 2021
© AP Photo / Michel Spingler
The government spokesperson insisted that “thanks to the hard work put in by hauliers and traders to get ready for the end of the Brexit transition period, there are no queues at the Short Straits” and disruption has actually been “minimal”, while freight movements have remained “close to normal levels”.

“As a responsible government, we made extensive preparations for a wide range of scenarios at the border, including the reasonable worst case. However, it appears increasingly unlikely that our reasonable worst case scenario will occur”, the official was quoted as saying.

However, RHA officials may disagree with this take on the situation, as their calculations have been confirmed by the chief executive of the British Ports Association, Richard Ballantyne. The official said that these concerns and figures echo his experience since the end of the Brexit transition period.

Empty Shelves in Northern Ireland and No Oysters for EU

The reported troubles have put in doubt Boris Johnson’s widely reported claim that he expressed following the signing of the Brexit deal that there would be “no non-tariff barriers to trade” in British trade with the bloc. But even more urgent issues have been experienced by Northern Ireland, which remains part of the customs union.

Exporters wishing to send goods to Northern Ireland from the rest of the UK are now subject to new checks, controls, and customs declarations – a process that severely complicates and slows down the flow of goods across the territories that are part of the United Kingdom. The disruptions have been so severe that they left Northern Ireland with empty shelves in January, according to local reports.

Speaking to members of Parliament last week, Prime Minister Boris Johnson maintained that the government “will do everything” it needs “to ensure that there is no barrier down the Irish Sea”, including triggering Article 16 of the Northern Ireland Protocol to allow the UK to override the agreement if it leads to inevitable “economic, societal or environmental difficulties”.

Due to the severe trade disruptions, leader of Northern Ireland’s Democratic Unionist Party Arlene Foster called on Johnson to replace the Irish clause completely, saying that it “has not worked” and “cannot work”. 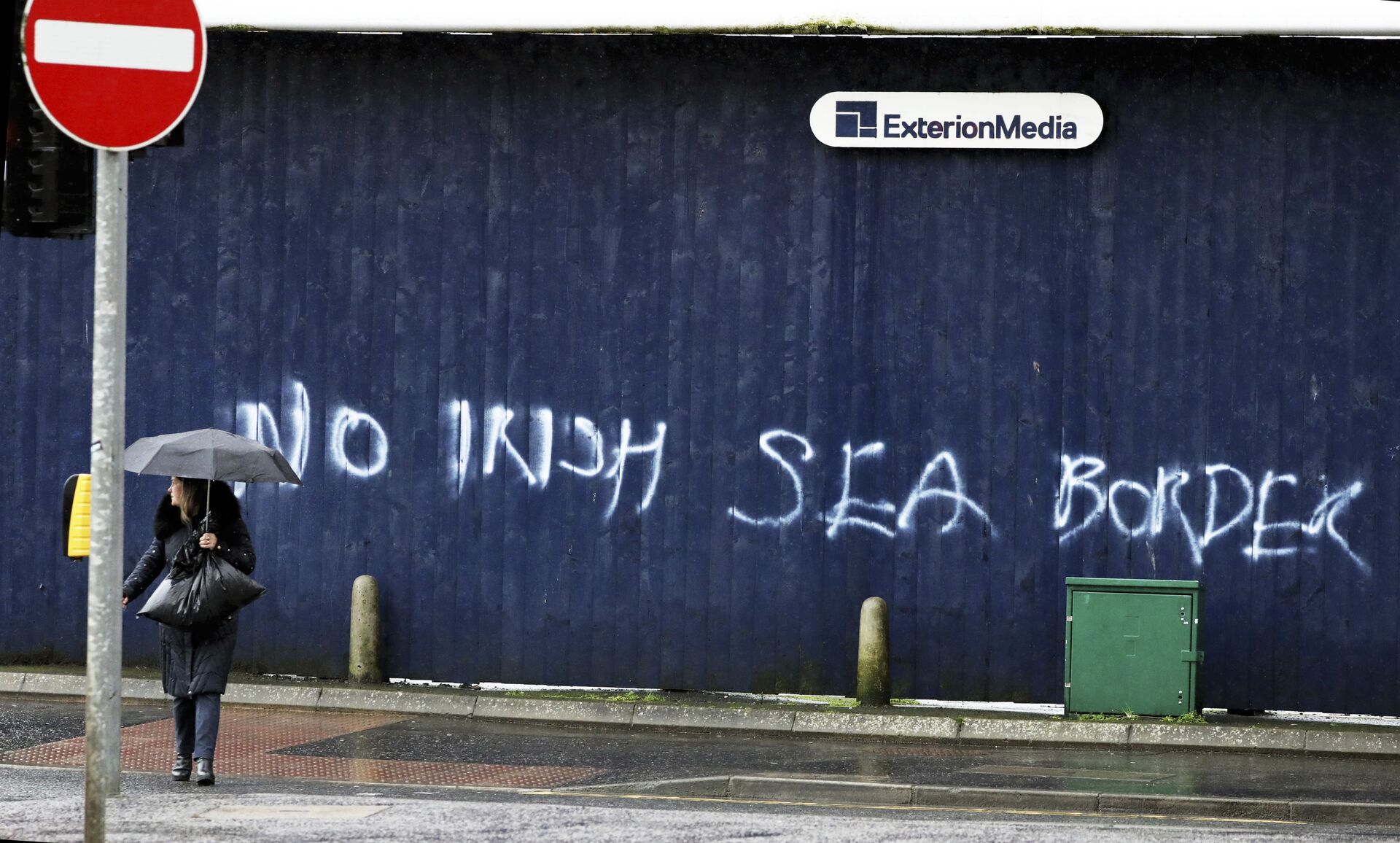 Another challenge following the UK’s departure from the European Union has fallen on the shoulders of the British shellfish industry – particularly small fisheries in England and Wales. Brussels has effectively barred “live bivalve molluscs” – which includes mussels, oysters, scallops, clams, and other types of shellfish – from entering the union for an unidentified period of time. The “devastated” exporters had hoped that the ban would last until 21 April, but the European Commission said this month that the restrictions would be ongoing.

When the Brexit agreement was reached in the last days of December 2020, shortly before the transition period was set to expire, Boris Johnson called the deal “a great treaty” that would allow the UK to “take back control” of its own destiny.