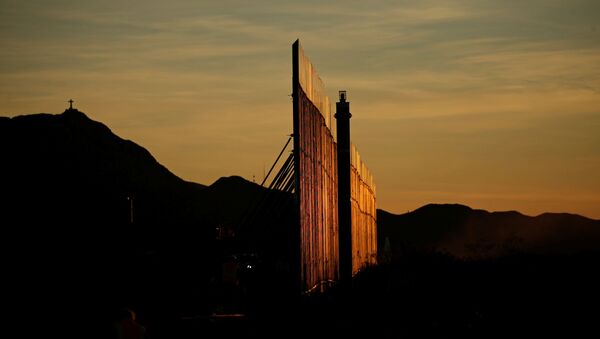 Daria Bedenko
All materialsWrite to the author
After kicking off his first days as president, Joe Biden moved to undo much of his predecessor's legacy, pledging to halt the building of Trump's wall on the US border with Mexico and implement less militarized immigration policies.

"It goes back to show you how vulnerable our southwest border is to include every American in this country if we don't have a secure border," Dannels said. "We’ve worked so well over the years and why we need a secure border is just common sense."

The sheriff said that "political theatre" he thinks is at play "is scary to all of us on the southwest border, sheriffs, police departments and our federal partners and every American should be standing up on this."

He also suggested that "thousands of children" were being exploited by cartels, many federal agents had been assaulted and "more than 1,000 gang members" from over a dozen countries had breached the southwest border in 2019.

"We’ve been down this road before", Dannels continued. "I don't know why we can't look in the past and find balance in our processes, our programs, and stop this madness."

Dannels comments about Biden's new immigration policies were echoed by Texas Attorney General Ken Paxton, who filed a lawsuit against the new administration, calling for the cancellation of an executive order to freeze the deportation of illegal immigrants for 100 days.

The legal action resulted in a temporary win for Texas, as a US federal judge issued a temporary restraining order on the order, and allowing deportations to continue.

The Biden administration has been solid on its intention to reverse what it sees as Trump's "draconian" immigration policies, particularly fortifying the Obama-era Deferred Action for Childhood Arrivals (DACA) - the so-called Dreamers Act - and ending construction on a US-Mexico border wall while rolling out a path for undocumented immigrants to obtain US citizenship.

Apparently desiring the newly-sworn US president to fulfill his promise, a caravan of thousands of migrants was reported to be headed from Honduras to the United States through several other countries such as Guatemala and Mexico. The crowd of migrants caused unrest at a transit-country border which resulted in a military response.

"We recognize the importance of the incoming Government of the United States having shown a strong commitment to migrants and asylum seekers, which presents an opportunity for the governments of Mexico and Central America to develop policies and a migration management that respect and promote the human rights of the population in mobility," said Pueblos Sin Fronteras [People Without Borders] a prominent migrant rights group, commenting on the caravan. "We will advocate that the Biden government honor its commitments."

The Biden response remains unclear, however, as his administration officials only reportedly said that changes at the border cannot be made overnight, advising immigrants against undertaking the journey at this time.

Biden's predecessor, President Donald Trump, warned before the former's inauguration that "waves" of illegal immigrants would follow when the latter's immigration policies are reversed.