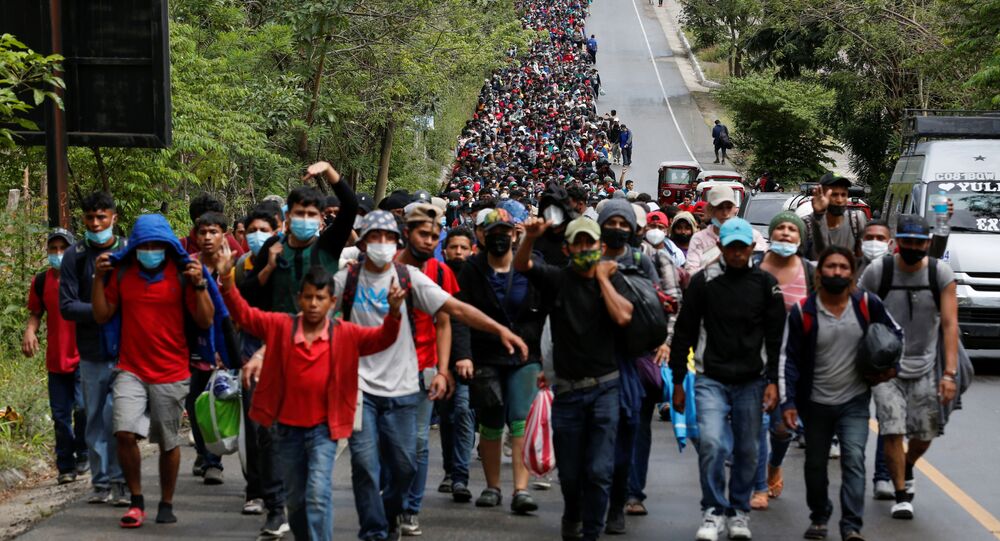 On Tuesday, the outgoing US president, Donald Trump, known for his tough stance on immigration, warned that if his policies are reversed, as Biden has pledged to do, "a tidal wave" of illegal migration will follow.

A migrant caravan of reportedly thousands is heading to the United States from Honduras, asking the incoming Biden administration to "honor its commitments", apparently referring to the president-elect's pledges to reverse most of Trump's immigration policies, according to media reports.

According to a statement issued by the migrant rights group Pueblo Sin Fronteras ["People Without Borders"], and cited by Fox News, the caravan expects the Biden administration to provide them with a warmer welcome than the outgoing administration offered.

"We recognize the importance of the incoming Government of the United States having shown a strong commitment to migrants and asylum seekers, which presents an opportunity for the governments of Mexico and Central America to develop policies and a migration management that respect and promote the human rights of the population in mobility," the group stated. "We will advocate that the Biden government honors its commitments."

The caravan, estimated by Guatemalan officials to be some 9,000 Honduran migrants, has passed through the Guatemala border past border police and is conducting what the government in Guatemala City believes is a violation of its national sovereignty.

​Escaping from poverty, gang violence and the aftermath of recent weather disasters in Honduras, undocumented migrants, most travelling by foot with little belongings, plan first to pass through Mexico before arriving to the United States border.

"I have come on foot, without money, suffering," 40-year-old Agustina Rodriguez told reporters, cited by AFP. "Thank God we are already here in Guatemala -- now on (to the United States)."

© REUTERS / LUIS ECHEVERRIA
Hondurans taking part in a new caravan of migrants set to head to the United States, try to cross the border, in El Florido, Guatemala January 16, 2021

US president-elect Joe Biden has indicated that he will eliminate Trump's Cabinet policies on immigrants, ending prolonged detention and family separations of migrants in the US, halt funding for expanded building of a wall on the US-Mexican border and revive Obama-era immigration policies.

© AFP 2021 / Jose CABEZAS
Acting Head of US Immigration Resigns After Just Two Weeks on the Post, Reports Say
Biden also vowed to create "a fair and humane immigration system", pledging help in addressing the causes of immigration that drive people from Latin American countries to the US.

"We're looking at two groups that are well over five thousand. And one of those groups have already gotten through the Guatemala border. And they're on their way to El Rancho, which is about the located centrally in Guatemala," the Trump appointee declared on Fox & Friends on Saturday. "It's coming. It's already started, just as we promised and anticipated it would with this rhetoric from the new administration on the border."

The fear was earlier emboldened by Trump, who claimed that there would be "a tidal wave of illegal immigration" if his immigration policies are reversed.

"If our border security measures are reversed, it will trigger a tidal wave of illegal immigration, a wave like you’d never seen before," Trump said on Tuesday, uttering the words in front of the US-Mexican border wall in Texas. "I can tell that already waves are starting to come up from 2,000 and 1,000 and 500 miles away."

Trump, who toughened US immigration policy and sought to end the Obama-era 'Dreamers' program that allowed the children of illegal immigrants to remain in the country until they became 21, has previously addressed the problem of illegal migrant caravans.

In 2018, when several migrant caravans arrived to the US-Mexico border, Trump sent some 5,000 troops to prevent the illegal migrants's entry into the US, including through the use of tear gas against them.

When asked for justification for what some considered at the time to be a heavy-handed response, Trump stated that tear gas is "very safe", and suggested that parents should not be "running up into an area where they know the tear gas is forming".

"In some cases, you know, they're not the parents", he said in 2018. "These are people, they call them grabbers. They grab a child because they think they'll have a certain status by having a child. You know, you have certain advantages in terms of our crazy laws that frankly Congress should be changing."

Why Did the Supreme Court Rule for Immigrant "Dreamers" & Not Trump?