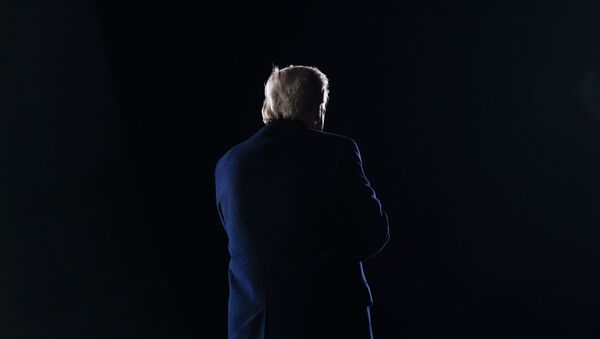 Svetlana Ekimenko
All materialsWrite to the author
On 13 January the US House of Representatives voted to impeach Donald Trump a second time, after accusations from both sides of the political spectrum that his claims of ‘election rigging’ had incited supporters to storm the Capitol. Notably, ten Republicans sided with the accusing Democrats.

President Donald Trump is reportedly looking into the ten members of the Republican Party (GOP) who broke ranks to side with the Democrats and supported his second impeachment on 13 January, writes the Wall Street Journal.

Trump is said to have summoned his political advisers shortly after the vote and demanded to know more about the renegades: from who they were, to whether he had ever done anything for them, according to sources cited by the outlet. He also reportedly instructed aides to find out who might run against the turncoats when they face re-election in two years.

After losing control of the House, the Senate, and the White House, the Republicans are facing multiple challenges going into the 2022 mid-term elections and the next presidential election in 2024.

No. 3 House Republican, Rep. Liz Cheney of Wyoming (whose father, former Vice President Dick Cheney, was one of the key architects of the Iraq War), was one of the ten GOP members who voted for impeaching the sitting POTUS, and has since resisted calls from some members of the House Freedom Caucus to resign. 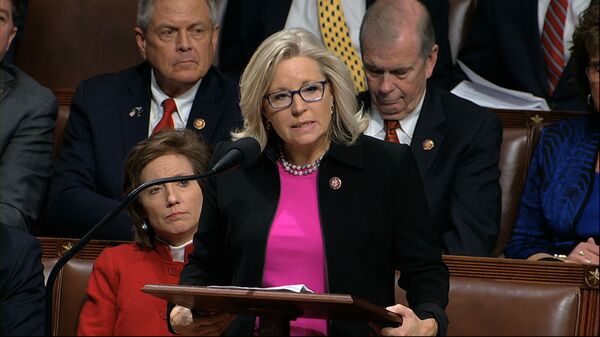 Rep. Liz Cheney, R-Wyo., speaks as the House of Representatives debates the articles of impeachment against President Donald Trump at the Capitol in Washington, Wednesday, Dec. 18, 2019.
© AP Photo / House Television

Other Republicans, including House Minority Leader Kevin McCarthy, while publicly denouncing Trump’s actions, perceived as egging his supporters to attack the US Capitol, had urged a less-severe censure.

The sitting president was suggested as having anticipated and even larger GOP defection, writes the publication referencing Trump administration insiders. 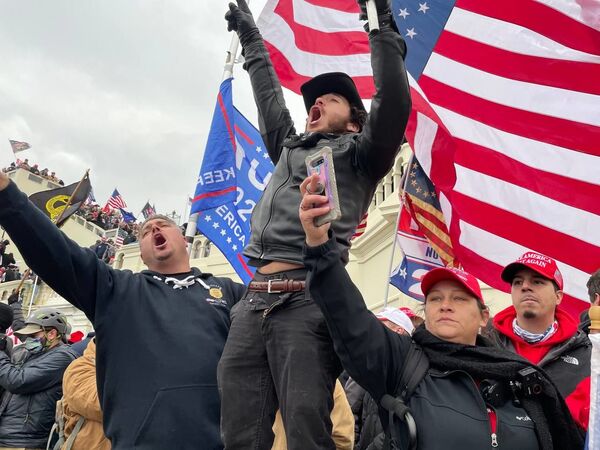 Demonstrators protest outside US Capitol Building in Washington to contest the certification of the 2020 presidential election results by the US Congress, 6 January 2021
© Sputnik / Artur Gabdrakhmanov [

Meanwhile, Senate Majority Leader Mitch McConnell (R-Ky.), who later this month will transfer the title to Democratic leader Chuck Schumer, revealed on 13 January that he is yet to decide on how he will vote on impeachment.

At least 17 Republican votes are required at the Senate trial to convict Trump, to reach the 2/3 majority needed, with 20 allegedly open to the idea, yet if the reports of his retribution plans are true, this may sway the stance of some lawmakers.

The Senate could also bar Trump from ever holding public office again, accordingly undermining his influence within the GOP.

Donald Trump is reported as having expressed growing concern with defections against him within his own party ranks, according to aides, as he looks ahead at a potential second Senate trial. 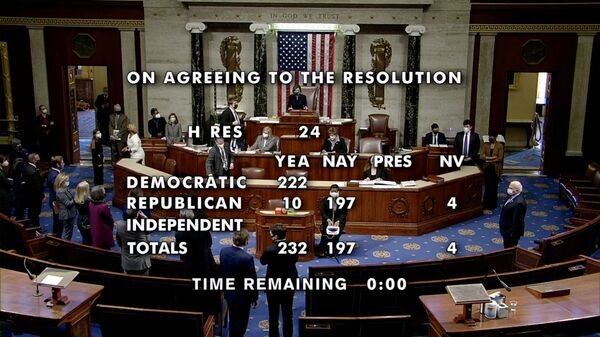 U.S. Speaker of the House Nancy Pelosi (D-CA) presides as the House of Representatives votes to impeach U.S. President Donald Trump for inciting insurrection, a week after a mob of his supporters stormed the U.S. Capitol, in this framegrab from video shot inside the House Chamber of the Capitol in Washington, U.S., January 13, 2021.
© REUTERS / House TV

The House of Representatives first impeached Trump in late 2019 for abusing power and obstructing Congress amid claims he pressured Ukraine into investigating the Biden family’s dealings in that country.

However, Trump was not removed from office by the Senate, which acquitted him 52-48.

Now, Trump has to plot a defence amid diminished legal and political clout, with the outcome hinging on how reliable the level of GOP support for him will be.

The outgoing president is said to have sought the advice of several Republicans on Capitol Hill of late regarding the matter of recruiting a legal representation team. Private attorneys who defended him earlier, as well as White House counsel, Pat Cipollone, allegedly informed Trump he need not stake on their support.

Trump was also purportedly advised against seeking the legal aid of his personal attorney Rudy Giuliani, who had led the largely failed campaign to overturn the results of the election.

Some, according to the outlet, discussed tapping John Eastman, a conservative constitutional law professor, as a possible defence attorney. 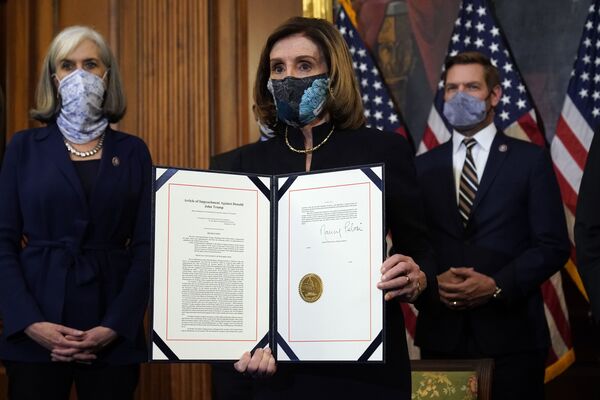 House Speaker Nancy Pelosi of Calif., displays the signed article of impeachment against President Donald Trump in an engrossment ceremony before transmission to the Senate for trial on Capitol Hill, in Washington, Wednesday, Jan. 13, 2021.
© AP Photo / Alex Brandon

Besides the Senate impeachment trial, it is thought that Georgia may pursue a case against Trump on solicitation to commit election fraud, conspiracy charges and a misdemeanour for obstruction of the "performance of election duties".

Trump is already being pursued by New York prosecutors in a criminal fraud inquiry into his finances.

The recent House impeachment vote has resulted in a cliffhanger as much about Trump’s subsequent Senate impeachment trial is uncertain.

Thus, there is a legal theory that Trump cannot face the subsequent Senate trial because he will no longer hold office and the purpose of impeachment is removal.

Trump will be the first ex-president to face an impeachment trial, and it is unclear if it will start this month.
House Speaker Nancy Pelosi (D-Calif.) has not offered clarification at a press conference on 15 January regarding the timeline for transmitting the impeachment resolution to the Senate.