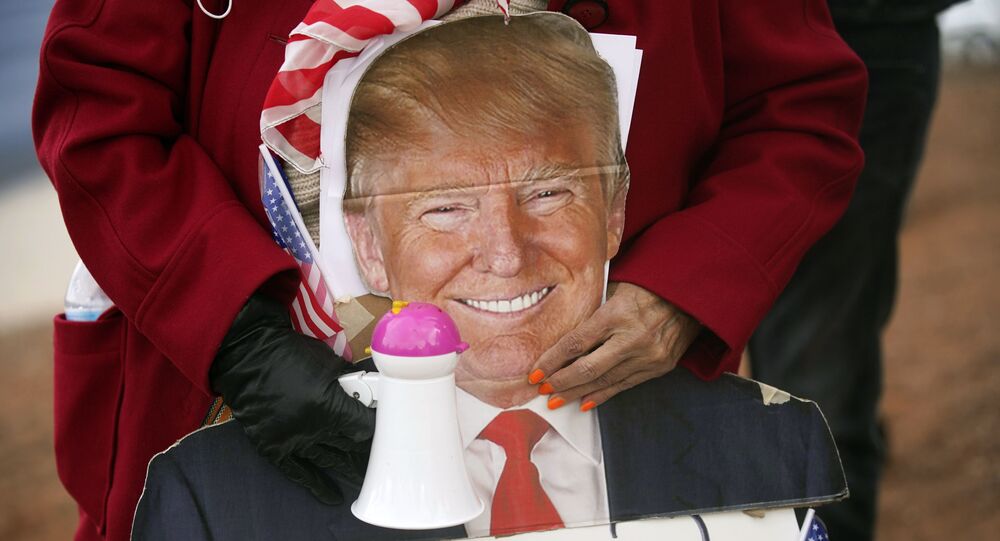 Donald Trump fired FBI director James Comey in 2017 after the agency decided to investigate the Democrats' allegations that the Republican president’s campaign had received help from Russia to win the 2016 election. The Department of Justice's independent probe, led by Special Counsel Robert Mueller, failed to find any evidence for the claims.

A US attorney-general under incoming President-elect Joe Biden should not “pursue a criminal investigation against Donald Trump”, writes former FBI director James Comey in a new book cited by The Guardian.

He's referring in part to charges of campaign-finance violations that could arise, since earlier in 2020 Manhattan District Attorney Cy Vance filed court papers indicating that the legal battle to obtain Donald Trump’s financial documents was tied to an inquiry incorporating the hush-money payments his then-attorney Michael Cohen paid to suppress the allegations of two women who claimed to have had affairs with Trump before the 2016 election.

The horses have most definitely left the gates and are racing towards the finish line.

Let that sink in. https://t.co/bfk1DnWLt2

​Donald Trump’s taxes are also the subject of a grand jury investigation.

Referring to “amassed evidence” against Trump, Comey, in his book Saving Justice: Truth, Transparency and Trust, due to be published on 12 January, is cited as saying:

“Although those cases might be righteous in a vacuum, the mission of the next attorney-general must be to foster the trust of the American people.”

As President-elect Joe Biden is set to be inaugurated on 20 January, he has yet to nominate someone for attorney-general. Former deputy attorney-general Sally Yates, who led the department while Comey headed the FBI and was also fired by Donald Trump, is reportedly among frontrunners, alongside former Alabama senator Doug Jones.

“By pardoning a resigned president, Ford had held [Nixon] accountable in a way that Trump would not be, even were he to be pardoned after losing re-election. That might not be enough accountability in Trump’s case. Or it may be, especially if local prosecutors in New York charge Trump for a legacy of financial fraud,” Comey writes.

This comes as Donald Trump has reportedly considered issuing a pre-emptive pardon to himself, with Comey casting doubt on the possibility of this, and highlighting a 1915 supreme court ruling which says a presidential pardon amounts to a confession of guilt.

On 9 May 2017 the White House announced President Donald Trump's decision to remove Comey from the post of director of the Federal Bureau of Investigation (FBI) on recommendations of the US attorney-general Jeff Sessions and his deputy Rod Rosenstein.

In a tweet at the time, Trump said Comey would be replaced "by someone who will do a far better job, bringing back the spirit and prestige of the FBI".

Trump letter to Comey...you can't get more direct than this.

​Rosenstein's memo to Trump had deplored Comey's handling of the Hillary Clinton email investigation, saying "the director was wrong to usurp the attorney-general's authority on 5 July 2016, and announce his conclusion that the case should be closed without prosecution."

In July 2015, the FBI launched an investigation into "potential unauthorised transmission and storage of classified information" on Clinton's email server.

Eventually, on 6 November 2016 the FBI advised against opening a criminal case against Clinton, merely describing her actions as "extremely careless".

Incidentally, Comey's dismissal also came days after he testified before Congress on alleged "Russian hacking" of the 2016 US presidential election.

The Trump administration had been dealing with accusations from Democrats that his campaign allegedly colluded with Russia, with the President repeatedly dismissing them as a witchhunt orchestrated to undermine his presidency.

After Comey’s exit, an independent investigation by the Department of Justice, led by Special Counsel Robert Mueller, failed to find any evidence to substantiate the allegations.

When @Comey talks about A Higher Loyalty and Saving Justice, he means it, but not in the way you think pic.twitter.com/tG0eIqZJPh

​Comey latest book is his second one: the first, A Higher Loyalty, was released in April 2018.
Comey has been cited as saying that his new publication is intended for “ordinary citizens, not legal experts or historians”.