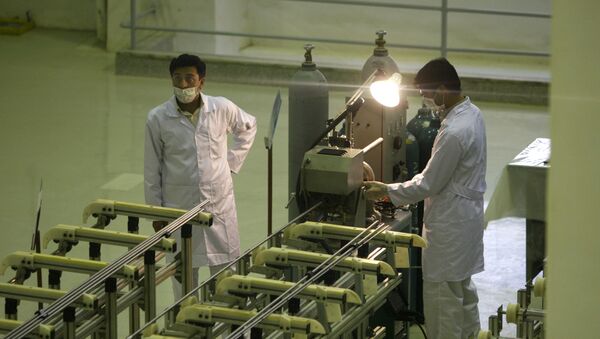 Tim Korso
All materials
Earlier, Tehran announced that the Fordow enrichment complex had started enriching uranium fuel far beyond the threshold set in 2015 under the Iran nuclear deal. The move was made in accordance with a law passed by the Iranian parliament in 2020 in light of continuing sanctions pressure on the country from the US.

Tehran's moves to enrich uranium fuel to 20% are a deviation from the provisions of the Joint Comprehensive Plan of Action (JCPOA), also known as the Iran nuclear deal, the Russian Foreign Ministry has said in a statement.

At the same time, these actions cannot be considered a violation of the Treaty on the Non-Proliferation of Nuclear Weapons, since Iran maintains transparency in everything related to its nuclear programme and allows inspectors from the International Atomic Energy Agency (IAEA) to monitor the peaceful application of the 20% enriched fuel, the ministry added.

"All of the uranium enriched to 20% remains under the control of the IAEA. The agency did not register its application in undeclared activities, which would violate the NPT", the Foreign Ministry statement said.

The Russian Foreign Ministry indicated that there is a "clear understanding" that the violation of the international obligations by the US became the trigger for Iran's deviation from the JCPOA, referring to Washington's introduction of economic sanctions against Iran in 2018. Moscow has condemned the US actions as a direct violation of the UN Security Council resolution that cemented the Iran nuclear deal.

The spokeswoman for the Russian Foreign Ministry, Maria Zakharova, noted that in order to reverse the damage done to the JCPOA, the US has to stop its course to undermine the international accord. Tehran, in turn, would also have to make significant reciprocal steps once Washington starts returning to the nuclear deal, the spokeswoman added.

She pointed out, however, that now Iran's return to complying with the JCPOA will be more difficult than before. Zakharova noted that Tehran will need additional efforts and will bear additional costs to make the Fordow enrichment complex compliant with the nuclear deal again.

The JCPOA provisions that the Russian Foreign Ministry's spokeswoman was referring to stipulate that Iran's nuclear enrichment facilities must produce only a limited amount of nuclear fuel per year and within an enrichment level of 3.67%. Tehran can only use first-generation IR-1 centrifuges for this purpose. However, the Iranian parliament decided at the end of 2020 that the country's nuclear facilities must boost the enrichment to 20%, while using previously prohibited advanced IR-2M and IR-6 centrifuges. The newly adopted law suggested that the measure must be taken should the US not lift its sanctions and the EU fail to come up with a mechanism circumventing them, specifically by allowing Tehran to freely sell its oil and remain connected to the global banking system.