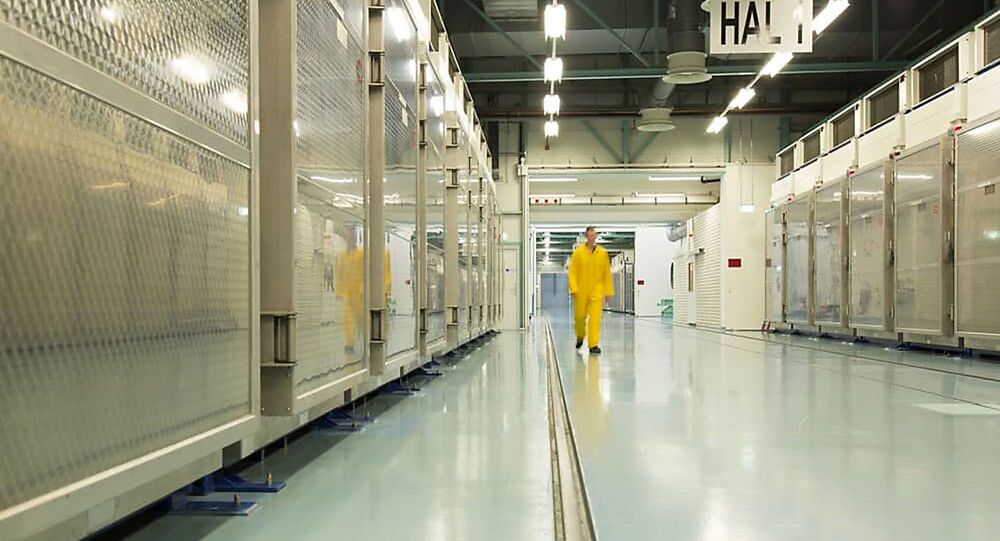 Tehran started to increase uranium enrichment a year after the US unilaterally abandoned the Joint Comprehensive Plan of Action (JCPOA), also known as the Iran nuclear deal, in May 2018, also reinstating harsh economic sanctions on the Islamic Republic.

Spokesman for the Atomic Energy Organisation of Iran (AEOI) Behrouz Kamalvandi announced that the country has produced its first uranium product (UF6) since restarting enrichment to a purity level of 20 percent.

"Considering the previous experience of enrichment at the Fordow [nuclear] facility, the new production line for enriching uranium to 20% was prepared very quickly", the spokesman pointed out on Monday.

The statement came after Iranian government spokesman Ali Rabiei said that President Hassan Rouhani had ordered the beginning of 20-percent uranium enrichment "a couple of days ago", and that "the process of injecting gas [into centrifuges] has started after informing the International Atomic Energy Agency [IAEA]".

This was echoed by Iranian Foreign Minister Javad Zarif who tweeted that the Islamic Republic had "resumed 20% [uranium] enrichment", in line with the 2015 Iran nuclear deal, also known as the Joint Comprehensive Plan of Action (JCPOA).

"Our remedial action conforms fully with Para 36 of JCPOA, after years of noncompliance by several other JCPOA participants. Our measures are fully reversible upon full compliance by all", the Iranian foreign minister stressed.

We resumed 20% enrichment, as legislated by our Parliament.

IAEA has been duly notified.

Our remedial action conforms fully with Para 36 of JCPOA, after years of non-compliance by several other JCPOA participants.

Our measures are fully reversible upon FULL compliance by ALL.

The developments followed the Iranian parliament in November 2020 passing a bill dubbed "The Strategic Measure for the Removal of Sanctions", which stipulated intensifying efforts in nuclear research in the wake of the assassination of top nuclear physicist Mohsen Fakhrizadeh. The bill specifically envisaged increasing the uranium enrichment level to 20 percent or more.

© AFP 2020 / HO / ATOMIC ENERGY ORGANIZATION OF IRAN
Iran's Uranium Enrichment Capacity Hits 8,660 SWUs, to Reach Pre-JCPOA Mark in Days - AEOI
Fakhrizadeh was killed in a raid in Absard, a city near the Iranian capital Tehran in late November. Iran was quick to accuse Israel of carrying out the assassination, which Tehran claimed was approved by the US.

As far as the American anti-Iran sanctions are concerned, President Donald Trump reinstated them after he announced the nation's unilateral withdrawal from the JCPOA in May 2018. Exactly a year later, Iran announced that it had started to scale down its JCPOA obligations, including those related to uranium enrichment.