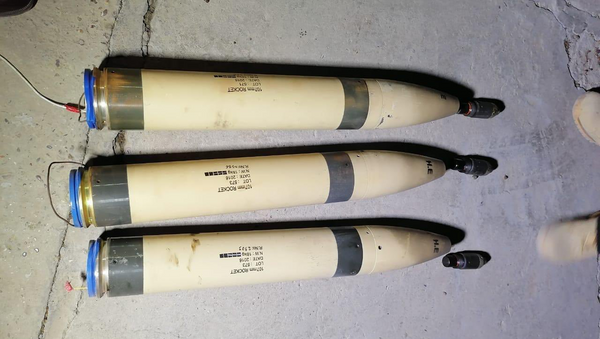 © Photo : Twitter / @realDonaldTrump
Subscribe
International
India
Africa
Ilya Tsukanov
All materialsWrite to the author
Last week, US Secretary of State Mike Pompeo alleged that "Iran-backed militias" were responsible for a recent attack on the Baghdad Green Zone, which houses the US Embassy complex. The Islamic Republic and its allies vocally denied the claims, with Tehran suggesting the timing of the attack was "very suspicious."

Iran "will openly and directly defend its people, security and vital interests" amid the US military buildup near its borders, and has received intelligence from Iraq of a "plot to fabricate [a] pretext for war," Foreign Minister Mohammad Javad Zarif has announced.

"Instead of fighting Covid in [the] US, @realDonaldTrump and cohorts waste billions to fly B-52s and send armadas to our region," the Iranian top diplomat wrote.

Zarif did not provide any further details about the evidence Iran had received. He previously taunted US President Donald Trump for posting a photo of unidentified rockets the US claimed pointed to Iran's responsibility for the 20 December rocket attack on the US Embassy in Baghdad, suggesting Trump was using "a worthless photo to recklessly accuse Iran," and recalling the "last time" the US "ruined" the Middle East by invading Iraq on a false pretext.

The 107mm shells posted by Trump bore English-language markings, leading to speculation about their actual origins. China manufactures a 107mm multiple rocket launcher known as the Type 63, with that system exported to dozens of countries around the world over many decades. In Iraq, it has been used by the Iraqi military, Iraqi Kurdistan forces, the Baghdad-allied Popular Mobilization Forces, and Daesh (ISIS)*. The US military is also known to have captured stocks of the weapon following the 2003 invasion of the country.

On Wednesday, USCENTCOM, the command of the Pentagon responsible for US operations in the Middle East, announced the deployment of Air Force B-52H Stratofortress bombers to the region to "underscore the US military's commitment to regional security." The deployment follows the sailing of a US guided missile submarine with as many as 154 Tomahawk cruise missiles onboard through the Hormuz Strait into the Persian Gulf a day after the Baghdad Embassy attack. Israel sent its own missile-armed sub through the Suez Canal as a "message" to Tehran a day later. Iranian officials dismissed the provocations as a "show of defiance and fear."

US Deploys Bombers in Middle East to Reportedly 'Caution' Iran
The US military buildup comes amid another spike in tensions between the US-Israeli alliance and Iran. Last month, Tehran accused Tel Aviv of killing one of its top nuclear and missile sciences in a brazen daylight attack outside the Iranian capital. President Hassan Rouhani said the assassination constituted an Israeli attempt to provoke a war in the final days of Trump's "ill-fated" presidency, but added that Iran would not be pushed into destabilizing the region.

Sunday will mark the one year anniversary of the US assassination of Qasem Soleimani, a senior Iranian military commander who assisted the Iraqi and Syrian governments in their war against Daesh and other terrorist groups. Iranian officials have repeatedly threatened to retaliate for the killing, and last January lobbed over a dozen missiles at a pair of US bases in Iraq, causing over 100 US servicemen and women to sustain traumatic brain injuries. This week, Iran's ambassador to Iraq said the Islamic Republic's further "revenge" may come in the form of seeing US forces expelled from the Middle East, rather than direct military action. The US has already committed to bringing troop levels in Iraq down to 2,500 troops, while Iraq's parliament has endorsed a resolution demanding their complete expulsion.