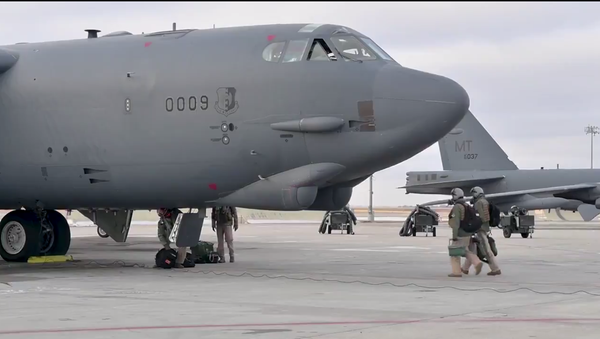 Daria Bedenko
All materialsWrite to the author
Fears have been rising in Washington of a possible escalation of tensions with Tehran, as the anniversary of the US drone attack that killed top Iranian General Qasem Soleimani looms, with many raising concerns about possible retaliation by the Islamic Republic.

The United States Central Command (CENTCOM) announced on Wednesday that US Air Force B-52H 'Stratofortress' aircrews from the Minot Air Force Base in North Dakota were deployed in the Middle East, saying it was done to "underscore the US military's commitment to regional security and demonstrate a unique ability to rapidly deploy overwhelming combat power on short notice."

"The United States continues to deploy combat-ready capabilities into the US Central Command area of responsibility to deter any potential adversary, and make clear that we are ready and able to respond to any aggression directed at Americans or our interests," said Gen. Frank McKenzie, CENTCOM chief, while not directly referring to Iran. "We do not seek conflict, but no one should underestimate our ability to defend our forces or to act decisively in response to any attack."

@usairforce B-52H "Stratofortress" aircrews from the @AFGlobalStrike headquartered @TeamMinot made a deliberate appearance in the Middle East today to underscore the U.S. military's commitment to regional security @DeptDefence @USAFCENT

A Politico report that followed the announcement cited an unnamed US senior military officer who said the bombers were deployed as a show of force meant to deter Iran from attacks against US soldiers or military assets.

The US reportedly received "signals" that Iran might be planning such attacks "in neighboring Iraq or elsewhere in the region in coming days". Before the CENTCOM announcement, the Politico source said that US intelligence had detected recent signs of “fairly substantive threats” from Iran that may be connected with the forthcoming anniversary of the assassination of Islamic Revolutionary Guard Corps (IRGC) General Qasem Soleimani. The drone attack that killed him occurred on 3 January 2020.

As the date looms, Washington and Tehran have exchanged mutual warnings. On Tuesday, Ali Rabiei, an Iranian government spokesman, warned against a militarisation of the Persian Gulf area.

"We do not see the militarisation of the Persian Gulf region in the interest of any country in the region or the world", Rabiei said.

Earlier last week, outgoing US President Donald Trump tweeted that he would "hold Iran responsible" if "one American is killed". His warnings came after he accused Iran of targeting the US embassy in the Iraqi capital in a rocket attack.

...Some friendly health advice to Iran: If one American is killed, I will hold Iran responsible. Think it over.

​The threat was immediately dismissed by Iranian Foreign Minister Javad Zariff, who noted that Trump used "a worthless photo to recklessly accuse Iran."

"Trump will bear full responsibility for any adventurism on his way out." Zarif warned.

Relations between the countries worsened after Trump in 2018 unilaterally withdrew the United States from the 2015 Joint Comprehensive Plan of Action (JCPOA), also known as the Iran nuclear deal, targeting the Islamic republic with harsh sanctions.

The drone attack ordered by Trump that assassinated Soleimani on 3 January intensified the escalation, prompting Iran to retaliate with airstrikes targeting US military bases in Iraq.

Although the strike did not result in casualties, the US later claimed that dozens of soldiers were diagnosed with traumatic brain injuries in the attacks.

Regarding further retaliation, Iranian officials have recently dropped several threatening hints, with Ayatollah Khamenei saying that the revenge will occur "certainly at the right time", and IRGC Brigadier General Mohammad Hejazi noting that "harsh revenge will be taken" for Soleimani's assassination.