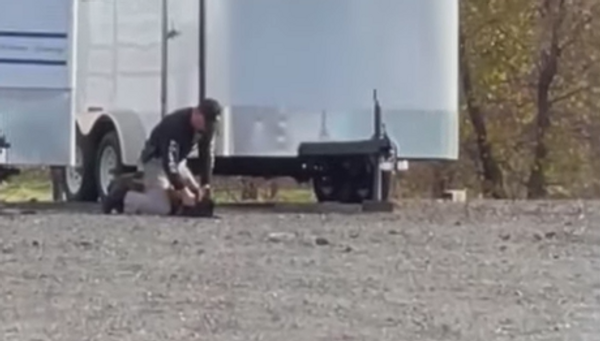 Mary F.
All materialsWrite to the author
Cruelty to animals, or animal abuse, refers to the infliction of harm by humans on animals. According to the Humane Society, the most common victims of animal abuse include dogs, cats, horses and livestock, and it is prevalent in the factory farm industry.

Police in the Northern California city of Vacaville are investigating one of their own officers after a video surfaced on Facebook Monday showing an officer punching a K-9 dog during a training exercise.

In the video clip, an unidentified officer is seen punching his K-9 partner while the dog is pinned between his legs near a warehouse on Vaca Valley Parkway. The officer stays on top of the dog during the video and appears to be looking around toward the end of the footage.

Witness Robert Palomino, who recorded the footage, told SF Gate that the officer punched the dog repeatedly until he noticed that Palomino was watching him.

“I heard a dog crying, when I looked, the officer was punching the dog over and over and got shocked about it," Palomino is reported as saying in his Facebook post. "I’m sure he saw me, he stopped beating the dog when he saw me and went behind those trailers in the video.”

“I just hope the dog’s OK and is removed from him, gets a better partner at least," Palomino told the Vacaville Reporter.

“I was shocked. It got me completely confused. Never seen anything like that before,” Palomino added. “He was beating his partner, his coworker, his best friend.”

The Vacaville Police Department is currently investigating the incident but has not identified the officer or dog involved.

"We understand how disturbing the video appears to many who view it and the range of emotions it creates. What the video doesn’t show is the moments prior, when the canine became aggressive towards his handler," the department said in a Facebook post. "We want to assure the public this incident is being evaluated in its entirety and will be investigated appropriately."

Police Capt. Matt Lydon told the Vacaville Reporter that the officer being investigated had been training with the dog for three to four months before the incident occurred.

According to Lydon, the dog was rewarded with a toy by the officer after successfully completing a narcotics search exercise. However, when the officer tried to take the toy back, the dog acted aggressively.

"That angered the dog. It lunges at him and attempts to bite him,” Lydon told the Reporter.