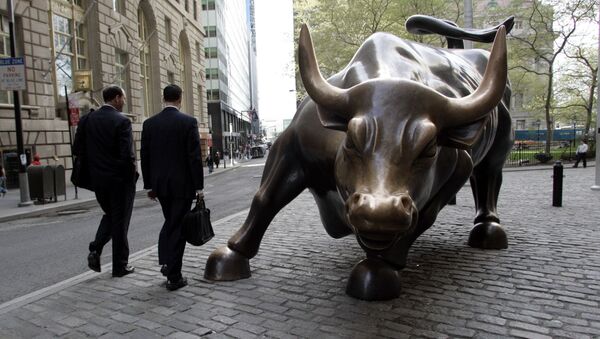 Ekaterina Blinova
All materialsWrite to the author
Wall Street investors fear that stock markets may face a downward correction under Joe Biden following a four-year rally under Donald Trump. Economic experts have weighed up the major driving factors behind the market rise and potential consequences of Biden's economic policies.

Since Trump took office in January 2017, the markets have seen a protracted rally due to massive tax cuts and financial deregulation. The US-China trade war and impeachment have failed to hinder this steep rise. Despite recent volatility caused by the coronavirus pandemic stocks have climbed under Trump, with the S&P 500 up over 50% since the November 2016 election, thus performing even better than in the four years following Democrat Barack Obama's first election win in 2008, as Reuters remarked in October 2020.

"Investors are rightfully concerned for two reasons", explains Julian Klymochko, CEO and chief investment officer at Accelerate Financial Technologies. "Equity valuations are at record highs on many measures, even exceeding valuations hit during the peak of the tech bubble in 1999-2000. In addition, the economic environment is highly uncertain, given the pandemic is raging and the vaccine is just rolling out".

He observes that monetary and fiscal policy has been the main driver of stock market returns lately. Therefore, investors' expectations for returns under Biden "are highly dependent on whether extreme monetary and fiscal stimulus is maintained or even increased".

If Biden adheres to a "moderate" course and favours increasing economic stimulus this could "further juice the stock market", Klymochko suggests.

According to Barron's, an American financial weekly, many on Wall Street hailed Biden's decision to tap Janet Yellen, former chair of the Federal Reserve, as his Treasury Secretary, because some investors had earlier expressed concerns that this position could be filled by Senator Elizabeth Warren, known for her "progressive" leanings. 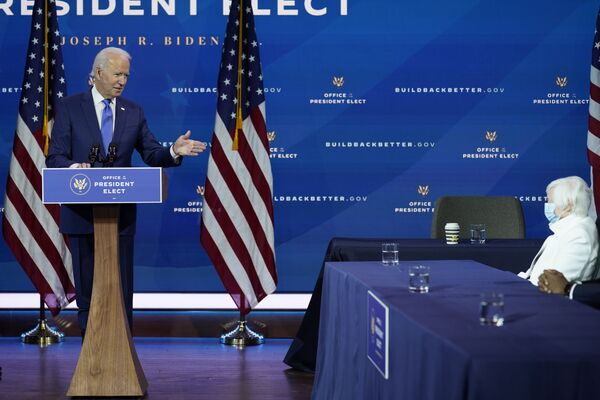 President-elect Joe Biden gestures towards Janet Yellen, who Biden nominated to serve as Secretary of the Treasury, as he speaks at The Queen theater, Tuesday, Dec. 1, 2020, in Wilmington, Del
© AP Photo / Andrew Harnik

'Rallying Markets Have Nothing to Do With Trump'

"Shares have been rising because of Quantitative Easing (QE), which started in 2009 and only stopped briefly, when the attempt to reverse it caused a flash crash in 2017", notes Steve Keen, a UK-based professor of economy, arguing that it wasn't actually Trump's achievement.

He adds that Federal Reserve bond purchases from the private financial sector have taken off again under COVID while share buybacks have also been a factor.

"These, and not Trump being president, are the main factors being the stock market's rise under Trump", he opines. "Traders think otherwise for political reasons, and before they were looking for reasons to speculate".

The Tax Cuts and Jobs Act, passed by the US Congress in December 2017 and inked into law by Trump, was the largest overhaul of the tax code in three decades, amending the Internal Revenue Code of 1986. It cut the corporate tax rate from 35% to 21% and boosted corporate profits and the stock market, as Market Watch pointed out in February 2019.

In contrast, Joe Biden's tax plan envisages increasing the corporate tax rate from 21% to 28%, with a 15% alternative minimum tax for those whose corporate income is higher than $100 million. However, Newsweek notes that the 2017 tax cut legislation would require congressional action since it is not set to expire until 2025. While the Democratic Party will hold the majority of seats in the House next year, it is still unclear whether the GOP will maintain control in the Senate. The upcoming 5 January Georgia runoffs will seal the balance of forces in the upper chamber. 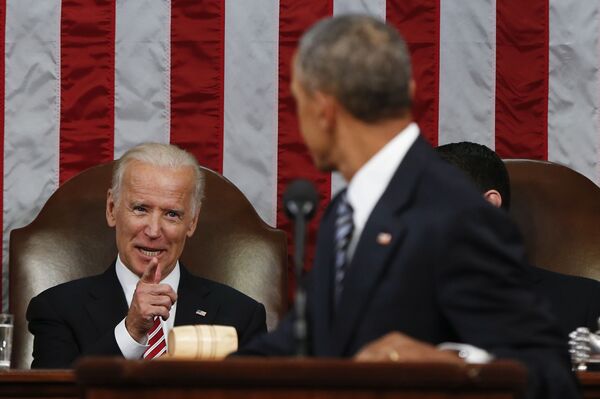 Vice President Joe Biden points at President Barack Obama during the State of the Union address to a joint session of Congress on Capitol Hill in Washington, Tuesday, Jan. 12, 2016.
© AP Photo / Evan Vucci

"Biden's promise to reverse Trump's well-crafted tax policies by targeting 'the rich' will end up targeting most workers", he notes. "Before that policy is adopted into law, consumers and investors will diminish interest in buying or starting capital projects and the ripple impacts likely will shrink demand at home, reducing prospects for most publicly traded stock prices".

Joe Biden "has a poor record on economics", while his developing cabinet "consists of many Obama-era failures, who seem certain to repeat, even compound, epic mistakes of the past", according to Ortel.

The analyst describes Barack Obama and Joe Biden's eight-year economic course as nothing short of a "war on capitalism" since they created structural government deficits and doubled the US total government debt from January 2009 through January 2017.

In addition to this, the Obama-Biden administration expanded government bureaucracies and adopted new complex regulations which "lessened attractiveness for investors to make needed capital additions at home, to hire private sector workers, and to increase their compensation and benefits", according to the analyst.

"Donald Trump's victory was due, in part, to revulsion by many over the wrongheaded and failed policies of the Obama-Biden administration", he believes. "The US stock market sensed that candidate Trump might prove effective in gutting constraints on our private sector, and has consistently bid up values to record levels that remain high".

This inertia continues even today, despite Biden's win and his forthcoming tax reform and ambitious climate change plan, the investor remarks not ruling out that the market is set for a massive downward correction. Still, some of the potentially negative effects of Biden's economic policies may be offset, to a degree, by the Federal Reserve System, "which has scope to lower benchmark interest rates", according to him.

"Lowering these rates supports prices of all US dollar denominated assets", Ortel notes. "That said, the US Federal Reserve System is stretched thin, particularly shouldering burdens imposed by the pandemic, the shutdowns, and their damaging consequences".