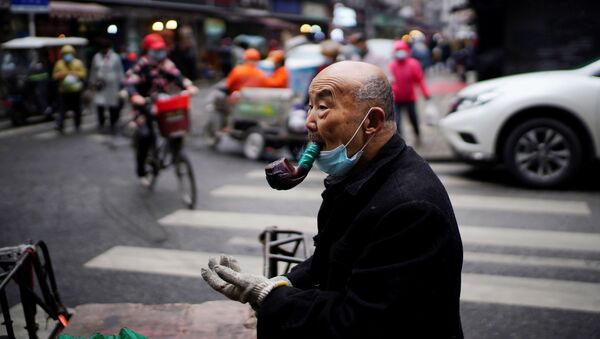 © REUTERS / Aly Song
Subscribe
International
India
Africa
Ilya Tsukanov
All materialsWrite to the author
The US and China have engaged in a months-long campaign of back-and-forth allegations about COVID-19's origins, including claims that the US Army brought the virus to Wuhan, or that it was deliberately or accidentally released from a Chinese biolab. None of the claims have been conclusive, and both sides deny having anything to do with the virus.

Secretary of State Mike Pompeo has once again accused the People's Republic of China of lying about the coronavirus pandemic, and has demanded the immediate release of Zhang Zhan, a 'citizen journalist' ostensibly imprisoned for her reporting on the virus.

"The Chinese Communist Party has shown once again it will do whatever it takes to silence those who question the Party's official line, even regarding crucial health information," Pompeo said in a statement Tuesday.

"We call on the PRC government to release her immediately and unconditionally," he added, while criticising the lack of access to her trial by foreign observers.

Later Tuesday, Pompeo tweeted that "in the face of the Chinese Communist Party's lies, Chinese citizen journalist Zhang Zhan's uncensored reports from Wuhan gave the world a much-needed window into the outbreak of COVID-19."

In the face of the Chinese Communist Party's lies, Chinese citizen journalist Zhang Zhan’s uncensored reports from Wuhan gave the world a much-needed window into the outbreak of COVID-19. She should be celebrated for her courage – not imprisoned for it.

The European Union issued its own statement Tuesday demanding Zhang's immediate release, accusing authorities of subjecting her "to torture and ill-treatment during her detention," and saying her confinement had led to a 'serious deterioration' of her health.

On Monday, a court in Shanghai found Zhang guilty of "picking quarrels and provoking trouble" in her reporting on the early stages of the coronavirus outbreak in the city of Wuhan, the epicentre of what would eventually become a pandemic. Zhang was sentenced to four years in prison. Before Monday's verdict was announced, the woman had been held at a detention centre since May.

Dissident-Turned-Political Tool for the West?

Commenting on Zhang's case on Tuesday, the Global Times, the online daily under the auspices of the CCP-approved People's Daily, accused the US and other western nations of "ruthlessly exploiting" her for political gain, suggesting that her actions were "in conflict with China's social governance system" and that she had violated a number of Chinese laws.

According to the Global Times' account, Zhang's reporting constituted a series of inflammatory and fear-mongering reports aimed at disrupting Wuhan's efforts to tackle the virus, rather than to shed journalistic light on the situation.

"By sensationalising the Zhang Zhan case, certain western voices are once again belittling China's achievements in the fight against the epidemic in their context. They are drawing the attention of western people to a purported 'Chinese dissident' in the fight against the epidemic. They seek to publicise how 'inhuman' China's efforts are and hence China should be criticised," the Global Times alleged.

The Wuhan Municipal Health Commission first reported a cluster of cases of pneumonia in Wuhan, Hubei province on 31 December 2019, with the novel coronavirus now known as SARS-Cov-2 eventually identified. The virus gradually spread to other regions of the province and the country, and later to other countries around the world. On 11 March, the World Health Organization assessed the global outbreak as a pandemic.

Although the WHO has suggested that "all available evidence" points to COVID-19 having an animal origin, and has said that it probably emerged through a mutation from a Wuhan wet market, Washington and Beijing have spent months accusing one another of engineering the virus in a lab, and of accidentally or deliberately leaking it.

US State Dept Releases Internal Cable That Sparked Claims of COVID-19 Wuhan Lab Origin Theory
The back-and-forth blame game died down somewhat by the summer after media investigations discovered that US, Australian and Canadian scientists and institutions had collaborated heavily with the Wuhan Institute of Virology to carry out a wide variety of potentially dangerous experiments involving coronavirus. This includes revelations that the US National Institutes of Health, a US government agency, gave the lab $3.7 million in grant money to conduct experiments on bats to examine how coronaviruses are transmitted.

Despite these revelations, US President Donald Trump has continued to refer to SARS-Cov-2 as the "China Virus" on Twitter, and to blame Beijing for the outbreak. China has responded with a viral social media campaign of its own.