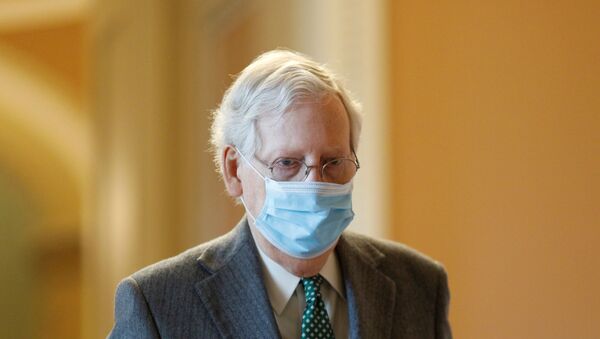 Jason Dunn
All materialsWrite to the author
On Monday, the United States Electoral College officially declared former Vice President Joe Biden, who received the highest number of votes in the 3 November election, the winner of the national ballot.

After Senate Majority Leader Mitch McConnell (R-KY) congratulated President-elect Joe Biden on his election victory on Tuesday upon securing sufficient electoral majority votes, he, along with deputies and colleagues from the US Senate, pleaded GOP lawmakers not to join "members of the House in objecting to the election results on Jan. 6, when Congress meets to ratify the Electoral College’s decision", according to The New York Times, citing people said to be familiar with the remarks.

Following the NYT report, US Senate Democratic Leader Chuck Schumer also said he had been informed of McConnell's urging to fellow Republicans to "go forward" and not oppose the Electoral College vote determining the Democratic candidate the victor.

"I am told he (McConnell) ... urged members to just go forward, not to mess around with the Electoral College or any shenanigans", Schumer told reporters.

On Tuesday, McConnell and the incoming president held a phone call.

President-elect Biden said that he called McConnell "to thank him for the congratulations, told him although we disagree on a lot of things, there’s things we can work together on" and added that it was a “good conversation”.

Certain members of the House, led by Alabama Representative Mo Brooks, are reportedly set to attempt the use of a constitutional process to contest the inclusion of five key battleground state vote tallies.

While they are unlikely to succeed, having the support of just one GOP Senator could cause the event to become a tumultuous affair, seeing supporters of incumbent President Donald Trump make a final effort in his defence.

McConnell stressed that any attempt by GOP lawmakers to support the move would ultimately fail, and humiliate the Republican Senators involved.

McConnell, however, also stated that he did not wish to initiate a conflict with Trump that could harm the GOP's electoral chances in two Georgia Senate runoffs, and harm future essential legislation that requires bipartisanship.

On Monday, the US Electoral College cast 306 votes in favour of the Democratic candidate, Joe Biden, thus confirming the earlier media projections on the former vice president's victory in the US 2020 presidential election.

Although Trump gained 232 electoral votes of the 538 available, POTUS has not yet conceded, with the current White House spokeswoman, Kayleigh McEnany, announcing on Tuesday that Trump "is still involved in ongoing litigation related to the election".

Since the 3 November election, the US president has been claiming that the election was rigged, citing allegations of fraud and dead people voting, amid other things.