US Could Impose Tariffs on Vietnamese Imports Amid Currency Manipulation Claims 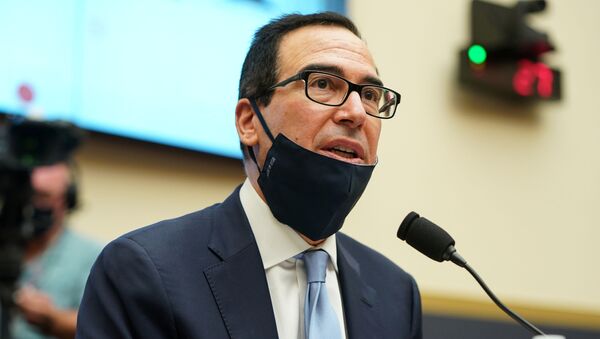 James Baillie
All materialsWrite to the author
Vietnam has been on Washington’s watch list of currency manipulators, as the US Treasury claimed in August as part of an anti-subsidy probe into tire imports that Vietnam’s currency was undervalued by about 4.7 percent against the dollar in 2019, due in part to government intervention.

The US Chamber of Commerce is seeking to prevent the imposition of US tariffs on billions of dollars of imports from Vietnam.

In a briefing note on its website the chamber on Tuesday said that Hanoi did not meet the US Treasury’s three-part test for unfair currency practices.

The chamber noted that Vietnam's current account is actually in deficit, not surplus, and was additionally benefiting from a huge inflow of foreign direct investment, partly as a result of the US sanctions on China.

It goes on to say that net purchases of foreign currency total less than 0.9 percent of Vietnam’s GDP.

On a final question, the chamber contends that while Hanoi's trade surplus with the US was $54.5 billion, clearly breaching the $20 billion mark, it was due in large part to the US imposition of Section 301 tariffs on over $250 billion of goods imports from China.

"They (the tests) demonstrate that Vietnam has not crossed the thresholds Treasury has established for two of the three criteria, and on the third, as explained below, US policies have arguably played as large a role as Vietnam’s," the chamber's briefing note said. "It’s time to call off the tariff threat".

In an interview with Reuters, John Goyer, the chamber’s executive director for Southeast Asia, said that tariffs would send a poor message to Hanoi and have a negative impact on bilateral relations. “Rash tariff action will be damaging to the overall relationship,” he was quoted as saying.

There have been growing fears that the Trump administration would impose sanctions on Vietnam dating back to July 2019 when US President Donald Trump suggested in response to a question about tariffs, that “a lot of companies are moving to Vietnam, but Vietnam takes advantage of us even worse than China.”

Washington has sought to sway Vietnam and other regional powers away from Beijing's influence in recent years, a policy that looks set to continue under US President-elect Joe Biden.