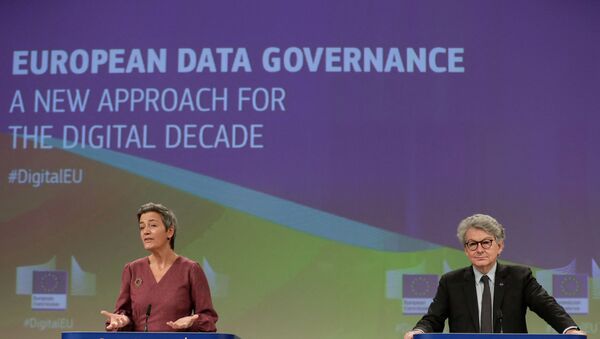 James Baillie
All materialsWrite to the author
The Digital Services Act, which is due to be presented today, will set new rules for companies deemed digital "gatekeepers" such as Google, Facebook and Amazon. These companies could face massive fines in Europe if they fail to abide by new Brussels rules geared to reduce their market dominance.

The EU is rumoured to be planning to impose fines of up to 10 percent of companies' annual revenues if they breach the rules laid out in the bloc's new Digital Services Act, a draft version of the regulation that was leaked to Euractiv suggests.

The leaked report notes that businesses that “systemically infringe” rules could be forced to sell parts of their operations.

The move could force tech giants to stop doing things such as ranking their own services higher on search engines or competing unfairly against those using their sites using data taken from other search engines.

The rule change could mean that tech companies will also be forced to provide annual reports on their content moderation practices.

The proposed rules also indicate they will have to open up their recommendation 'black boxes' and reveal why their algorithms have promoted a particular piece of content:

"They should clearly present the main parameters for such recommender systems in an easily comprehensible manner to ensure that the recipients understand how information is prioritised for them," the report reads.

The DSA package of laws aims to revisit old rules called the e-Commerce Directive, which hasn't been updated for 20 years.

They will also have to give the public access to "repositories of advertising" to "to facilitate supervision and research into emerging risks brought about by the distribution of advertising online, for example in relation to illegal advertisements or manipulative techniques and disinformation."

The move comes after EU auditors found that the bloc had been ineffective in preventing Google and Facebook from stifling competition.

The @EUauditors said the EU has been ineffective in limiting @Facebook & @Google from destroying competitors and that the EU needed to overhaul its rules to make them fit for the digital era.#DigitalServicesAct#DigitalMarketsAct
https://t.co/4kUTtleiwA

Technology policy fines in #DigitalMarketsAct to be 10% of company turnover - for the big platforms? Will this improve cybersecurity? ;-) #DigitalServicesAct https://t.co/YLeayDl8qQ

Others wondered whether the EU will really be able to curb the power of big tech.

While others noted that the EU move to curb the power of big tech goes far further than anything currently being attempted in the United States.