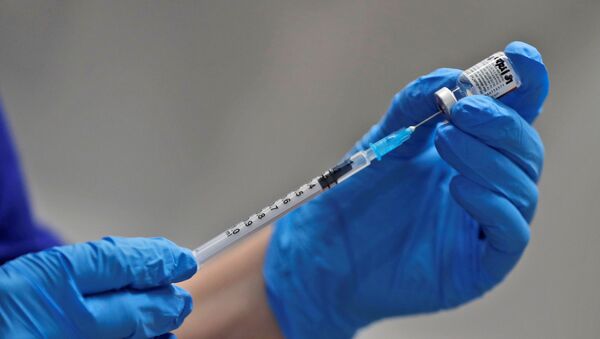 © REUTERS / Frank Augstein
Subscribe
Matthew Daniel
All materials
Public opinion polls show that about half of the American population is willing to take the COVID-19 vaccine. However, many people have concerns surrounding the safety of the jab, with some saying that they plan to adopt a ‘wait-and-see’ approach in the first few months of the vaccine’s rollout.

The head of the US Food and Drug Administration (FDA) was told by a high-ranking White House official that he could be fired unless he cleared for release the COVID-19 vaccine, an incident which happened just hours before the FDA authorised the vaccine, according to AP News.

The FDA gave the stamp of approval for emergency use of the vaccine produced by Pfizer Inc. and its German partner BioNTech on Friday, 11 December as part of the US government’s ramped-up efforts to reduce the number of COVID-19 cases. President Trump announced that the vaccine had “passed the gold standard of safety” and touted the vaccine as “one of the greatest scientific accomplishments in history”.

However, it has been revealed that prior to the vaccine’s release, discussions were held between White House Chief of Staff Mark Meadows and FDA head Stephen Hahn, a senior administration official familiar with the conversation told AP News.

According to the report, Mr Meadows told Mr Hahn that his job was at risk if the emergency use of Pfizer’s vaccine was not authorised by Saturday, 12 December, another administration official told AP.

The development followed a series of tweets by President Trump in which he took direct aim at the FDA and Mr Hahn, complaining that the rollout of the vaccine was too slow, suggesting that the pace of the operation was preventing the saving of American lives.

For his part, in a statement to AP, Mr Hahn disputed the characterisation of his call with Chief of Staff Meadows as being confrontational.

"This is an untrue representation of the phone call with the Chief of Staff”, Hahn claimed in the statement.

“The FDA was encouraged to continue working expeditiously on Pfizer-BioNTech’s EUA request. FDA is committed to issuing this authorization quickly, as we noted in our statement this morning.”

President Trump has consistently called over the past few weeks for the FDA to speed up the process of releasing the vaccine as soon as possible. Mr Trump is reported to have told close confidantes that he believes the process is being slowed down in an effort to undermine his administration by denying it a victory at a time when he is challenging the November 2020 election results as fraudulent.