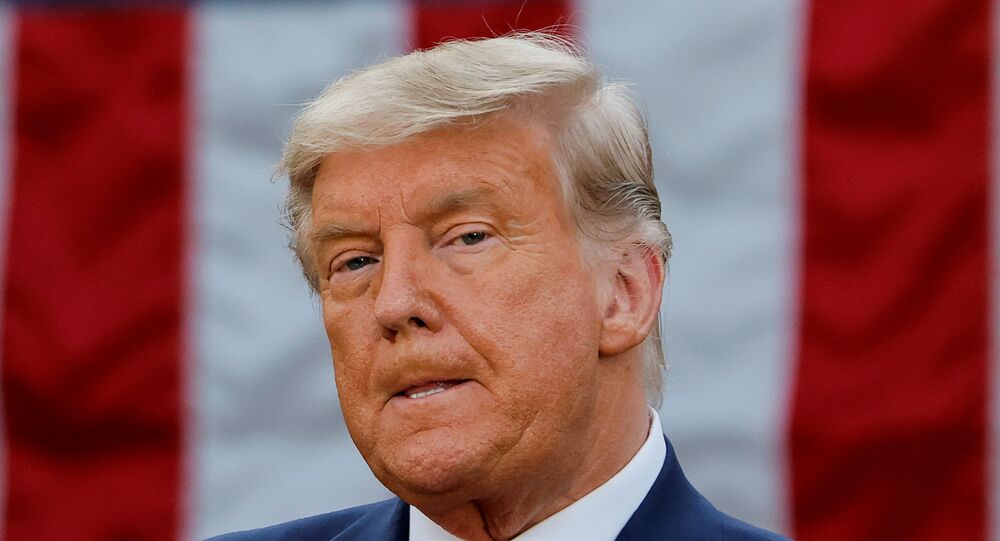 After SCOTUS Texas Ruling, Trump Claims He Won Election by a Landslide if 'Fake Voters' Not Counted

Earlier, the US Supreme Court rejected a lawsuit filed by Texas calling on it to invalidate the results of the presidential election in several key battleground states – Georgia, Michigan, Pennsylvania, and Wisconsin. Trump and many Republicans allege that Biden won these states due to voter fraud.

US President Donald Trump has again claimed he won the 2020 presidential election in a landslide. In apparently veiled criticism of his rival Democrat Joe Biden, Trump wrote on Twitter that he was victorious with legal votes and not with the help of "fake voters and fraud that miraculously floated in from everywhere". "What a disgrace", Trump wrote.

I WON THE ELECTION IN A LANDSLIDE, but remember, I only think in terms of legal votes, not all of the fake voters and fraud that miraculously floated in from everywhere! What a disgrace!

Twitter has flagged the president’s tweet with the caption "This claim about election fraud is disputed" and blocked users from sharing it.

The development comes just two days before members of the US Electoral College meet to decide the winner of the 2020 presidential election.

Battle to Overturn the Results of the Vote

Trump and his allies have repeatedly claimed that the vote was rigged and that Democrat Joe Biden won thanks to widespread voter irregularities. The president his supporters have filed more than 50 lawsuits in several states demanding recounts of ballots, citing voter fraud. Most of them have been withdrawn or shot down due to a lack of evidence. For example, in Pennsylvania, one of the key battleground states, the Trump campaign tried to block the certification of ballots, claiming that 700,000 ballots were cast illegally for Biden. The lawsuit was dismissed on the grounds of lack of "factual proof".

Recently, the Texas attorney general filed a lawsuit to the US Supreme Court calling on it to invalidate the results of the vote in Georgia, Michigan, Pennsylvania, and Wisconsin. The lawsuit filed by Texas Attorney General Ken Paxton was supported by 18 other state attorney general and 126 Republican members of the Congress, including Minority Leader Kevin McCarthy.

The lawsuit claimed observers were not allowed to oversee the counting of ballots, citing accounts of witnesses who reportedly saw voting irregularities and suggested that voting machines had allegedly been manipulated to affect the results of the vote.

The US Supreme Court rejected the lawsuit, saying Texas did not have legal standing to bring the case.

The president appears unwilling to give up his fight against Biden. According to The Wall Street Journal, citing people familiar with the matter, Trump plans to create a special counsel to investigate allegations of voter fraud in the presidential election as well as Hunter Biden, the son of his rival Joe Biden.

As mentioned earlier, on 14 December members of the Electoral College will convene to choose the winner of the election. Biden has 306 electoral votes to Trump’s 232 votes. Trump, who has refused to concede defeat, previously said that he would leave the White House if the Electoral College votes for Biden. However, in the run-up to the election, the president refused to guarantee a peaceful transition of power.