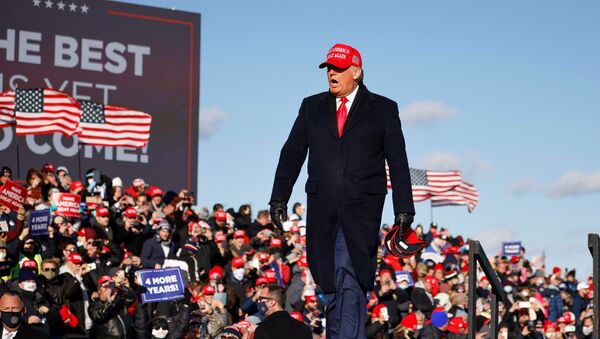 Amid the ongoing chaos around this year's US election, speculation and calls for POTUS Donald Trump to run in 2024 have been rife, with a recent survey revealing that the majority of Republican voters would like to see Trump at the helm in four years.

US President Donald Trump has hinted at running for president again in 2024 if his ongoing bid to win four more years fails. The teaser came as he showed up at a dinner party at the White House on Tuesday evening.

A video of Trump's appearance was livestreamed on Facebook by former Oklahoma Republican Party Chair Pam Pollard, who attended the reception. Pollard has since either deleted the stream, or restricted access to it.

"It's been an amazing four years. We're trying to do another four years. Otherwise, I'll see you in four years", Trump was heard telling a crowd.

The US president has reiterated that he won the election, which he described as "rigged", referring to his opponent, Joe Biden, being called the winner by major media outlets, even though the official results are yet to be announced.

US Election Whistleblowers Roll Out Eyewitness Account of Suspected Voter Fraud
This will occur after the Electoral College casts its votes on 14 December. Since the US media overwhelmingly called the election for Biden, Trump has repeatedly raised allegations of voter fraud with claims that deceased Americans had voted, and that votes in his favour were miscounted. Although the Trump campaign has filed dozens of lawsuits contesting the results in battleground states, the vast majority of the challenges have so far been rejected.

Trump's bombshell tease comes amid rumours and calls for him to run in 2024. Last month, Republican Senator Lindsey Graham urged POTUS to stand again in 2024 if Biden is declared the official winner of the 2020 election.

Shortly thereafter, a survey conducted by Seven Letter Insight revealed that 66 percent of Republican voters want Trump to launch a 2024 bid, while another 38 percent want him to "refuse to give up power and remain in the White House".

Trump has so far refused to concede, but greenlighted the transition process to the Biden team. He said last week that he would vacate the White House if the Electoral College, poised to vote on 14 December, certifies Biden as the winner in the 2020 presidential election. He, however, added that it would be a "mistake" if the Electoral College ends up voting for the Democrat.