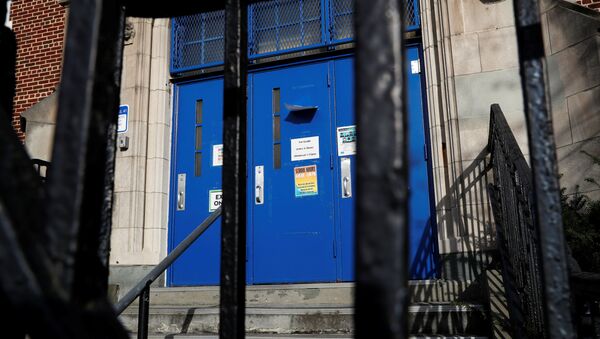 © REUTERS / SHANNON STAPLETON
Subscribe
Kirill Kurevlev
Correspondent
All materialsWrite to the author
The COVID-19 pandemic has hit the US hardest of all, with over 12Mln confirmed cases to date. Initially the Big Apple took the brunt of the virus, although later the daily number of new cases dropped significantly. With numbers now almost doubling in the last two weeks, Mayor Bill de Blasio has again shuttered all the schools within the city.

Staten Island City Councilman Joe Borelli, along with some parents with school-age children, filed a lawsuit demanding that in-person public education in the city's public schools be reopened, according to a Saturday tweet from the local lawmaker.

According to the official release, the lawsuit filed, on 20 November, 2020, in the Southern District of New York, seeks an emergency injunction to reopen public schools.

The first suit, filed on 21 October, in the Richmond County Supreme Court, demanded the full reopening of all public schools, complaining that it denied a child's right to an adequate education.

Last night, we filed our 2nd lawsuit in an attempt to keep in-person learning @ #NYC schools. The DOE has done a good job, yes a good job!, keeping children & staff safe in school buildings & the medical & scientific consensus is that schools are not super spreaders. pic.twitter.com/s00Bj2sCSD

“Mayor de Blasio and Chancellor Carranza have continued to fail our children time and time again,” Borelli said in the release. “Even though they had six months to prepare for this school year, they failed to do so and our children are forced to pay the price.”

"Remote learning has proven to be a failure and now they have taken the extra step of closing the schools completely", the councilman asserted.

According to the report, one lawyer representing the complainants, James Mermigis, said that the state's governor, Andrew Cuomo, had previously noted low infection rates within New York schools.

“Why are we closing our schools? This is just another example of the random and arbitrary decisions that are being made in Albany and City Hall. But now, we are hurting our children and this incompetence at the top is unacceptable”, he said.

On Wednesday, the office of the New York mayor announced a temporary closure of all schools as a precaution, after the city topped a 3-percent infection rate, based on a seven-day average. The 3-percent threshold, which obliges in-person public education be temporarily shut down, was set by the city administration over the summer.

The decision has been implemented despite information that the Department of Education, performing its own random testing of students and staff in schools, stated that infection rates within the buildings were minimal, a purported 0.19 percent, according to reports.

The mayor's order, to temporarily return to remote learning, has been met by some parents with discontent. A protest rally was held in New York City to deliver a petition demanding that schools reopen. As reported, a mayoral aide accepted the petition under the promise of assuring that the mayor would see it.