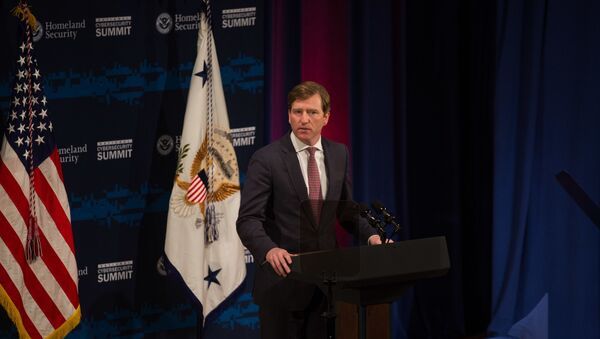 Daria Bedenko
All materialsWrite to the author
Christopher C. Krebs assumed office of the Director of the Cybersecurity and Infrastructure Security Agency (CISA) in the United States Department of Homeland Security (DHS) in November 2018.

US President Donald Trump announced in his Twitter on Tuesday that he fired Chris Krebs from the position of the Director of the Cybersecurity and Infrastructure Security Agency of the DHS.

According to the President, Krebs was fired because of his "highly inaccurate" statement on the security of 2020 US presidential election.

"The recent statement by Chris Krebs on the security of the 2020 Election was highly inaccurate, in that there were massive improprieties and fraud - including dead people voting, Poll Watchers not allowed into polling locations, “glitches” in the voting machines which changed votes from Trump to Biden, late voting, and many more", Trump tweeted. "Therefore, effective immediately, Chris Krebs has been terminated as Director of the Cybersecurity and Infrastructure Security Agency".

...votes from Trump to Biden, late voting, and many more. Therefore, effective immediately, Chris Krebs has been terminated as Director of the Cybersecurity and Infrastructure Security Agency.

In a follow-up tweet, Trump said that "the only thing secure about our 2020 Election was that it was virtually impenetrable by foreign powers".

"On that, the Trump Administration takes great credit", he continued. "Unfortunately, the Radical Left Democrats, Dominion, and others, were perhaps more successful!".

"In firing Director Krebs for refusing to lend credibility to his baseless claims and conspiracy theories about voter fraud, the President is telling officials throghout the Administration to put his political interests ahead of their responsibilites to the American people. That is not only disturbing, it is antidemocratic", the statement said.

Reports suggesting that Krebs was soon to be removed from his position emerged earlier in November, with Politico alleging that it could be "in part because of a website he created to debunk election-related misinformation" - webpage on CISA website named "Rumor Control".

Krebs was reportedly expected to be fired since just after the election day.

Earlier on Tuesday, Krebs tweeted: "ICYMI [In case you missed it]: On allegations that election systems were manipulated, 59 election security experts all agree, 'in every case of which we are aware, these claims either have been unsubstantiated or are technically incoherent'". 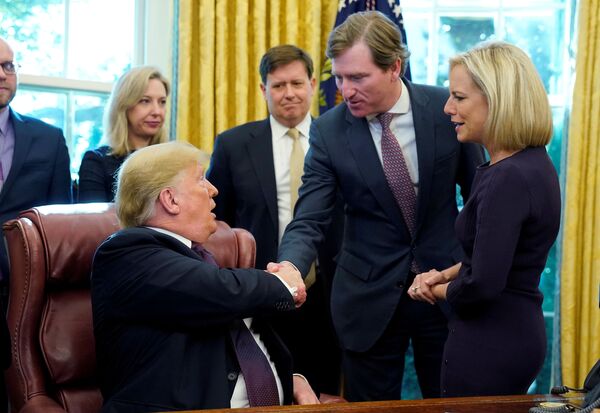 U.S. President Donald Trump shakes hands with Chris Krebs, the director of the Cybersecurity and Infrastructure Security Agency (CISA) as DHS Secretary Kirstjen Nielsen (R) looks on after a signing ceremony for the Cybersecurity and Infrastructure Security Agency Act in the Oval Office of the White House in Washington, U.S. November 16, 2018
© REUTERS / JONATHAN ERNST

Shortly after the election day, DHS and CISA released a joint statement regarding the election, calling it "the most secure in American history" - something that is contradictory to Trump's opinion on the 2020 electoral process.

"There is no evidence that any voting system deleted or lost votes, changed votes, or was in any way compromised", the joint statement said.

While the mainstream US media have projected the Democratic candidate Joe Biden to win the presidency in the 2020 race, Trump has been vehemently refusing to concede or accept the preliminary results, claiming that the election was "rigged".

Falling in line with Trump's assertions regarding the election, reports emerged saying that dead people took part in voting and postal workers were instructed to backdate mail ballots that arrived after the election day.

Recently, two men were charged with massively submitting thousands of fake voter registration applications on behalf of the homeless in California.