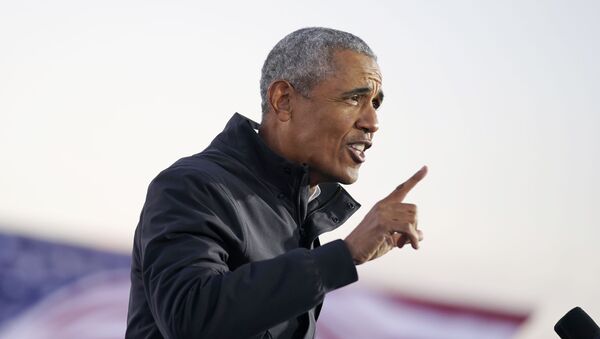 Oleg Burunov
All materialsWrite to the author
Late last week, Barack Obama made it plain that he excludes any position in Democrat Joe Biden's administration, a statement that came amid President Donald Trump's ongoing drive to challenge the results of what POTUS describes as a rigged election.

In an interview with CBS News' 60 Minutes on Sunday, former US President Barack Obama focused on POTUS' repeated election fraud claims, saying that the time has come for Donald Trump to admit defeat.

"[…] I think it was time for him to concede probably - the day after the election - or at the latest, two days after the election. When you look at the numbers objectively, [Democratic nominee] Joe Biden will have won handily", Obama noted.

He referred to US presidents as being "public servants", who are "temporary occupants of the office, by design".

"And when your time is up then it is your job to put the country first and think beyond your own ego, and your own interests, and your own disappointments. My advice to President Trump is, if you want at this late stage in the game to be remembered as somebody who put country first, it's time for you to do the same thing", the former POTUS added.

When asked about the possible repercussions of "widespread election fraud" claims made by the Trump campaign, Obama described it as "one more step in delegitimising not just the incoming Biden administration, but democracy generally".

Dubbing Trump a person who "doesn't like to lose and never admits loss", the ex-US president voiced concern about "the fact that other Republican officials who clearly know better are going along with this, are humouring him [POTUS] in this fashion".

"[..] That's a dangerous path. […] I think that there has been this sense over the last several years that literally anything goes and is justified in order to get power. And that's not unique to the United States. There are strongmen and dictators around the world who think that, 'I can do anything to stay in power. I can kill people. I can throw them in jail. I can run phony elections. I can suppress journalists'. But that's not who we're supposed to be", Obama noted, in an apparent nod to Trump.

Trump Tweets Biden 'Won Because the Election Was Rigged', Refuses to Concede Defeat
The interview came as the ex-POTUS told CBS Sunday Morning that Biden "will be the next president of the United States" and that he rules out any role in the Biden administration.

Although the official results of the 3 November US presidential election are yet to be declared, Biden has already declared himself president-elect and is forming his transition team. Trump, in turn, recently tweeted that he "concedes nothing" and that he actually won the election.