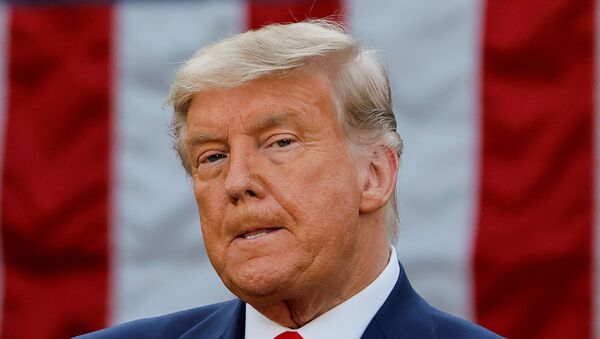 Tim Korso
All materials
Despite major news networks declaring Biden the winner of the election a week ago, Trump has so far refused to concede, threatening to challenge the results in several states, citing massive voter fraud purportedly taking place there.

US President Donald Trump has stated that the only reason Biden "won" the election is because it was "rigged" to favour the Democratic candidate and steal votes from POTUS. The post was immediately flagged by Twitter as being a "disputed claim" regarding alleged voter fraud in the presidential election.

The president went on to accuse the Dominion Voting Systems Corporation of being responsible for its machines not counting the ballots correctly, as well as of allegedly being owned by "radical left" Democrats. POTUS suggested that the "glitches" in voting machines reported at some polling stations on election day, was, in fact, evidence of the Democrats purportedly trying to "steal" votes from him. Trump alleged that many more attempts managed to go unnoticed.

All of the mechanical “glitches” that took place on Election Night were really THEM getting caught trying to steal votes. They succeeded plenty, however, without getting caught. Mail-in elections are a sick joke!

In addition, POTUS accused "the fake & silent media" and state authorities of also allegedly playing their part in rigging the 2020 presidential election to ensure Joe Biden's victory. Trump added that the Democrat "won" only in the eyes of the "fake news media" and once again refused to concede.

Trump criticised the Dominion voting machines after it was revealed that the hardware erroneously flipped 6,000 votes in favour of Democrats in the state of Michigan. Trump campaign lawyers have since requested a recount in all the counties that used the Dominion machines, questioning the correctness of the voting results in the states where they were used.

POTUS has refused to recognise the projected victory of Democrat Joe Biden as most states, with the exception of Georgia, have finished counting the ballots, with Biden so far getting more than the 270 Electoral College votes needed to secure being elected. However, the incumbent president's campaign is disputing the results in multiple states, citing voting "irregularities" when large amounts of votes for Biden suddenly started emerging in several key states towards the end of the counting process.

Trump has also repeatedly slammed the authorities in a number of states, including Nevada and Pennsylvania, where the Democrat is winning, for purportedly not allowing GOP observers into the counting rooms without providing valid reasons.

In addition to lawsuits over alleged cases of voter fraud, the Trump campaign may demand recounts in Wisconsin, Pennsylvania, and Nevada in the hopes of improving the results and tipping the scales in Trump's favour, as the GOP candidate trails very close behind his Democratic opponent in these states. Georgia is in the process of recounting the ballots due to the narrow margin of the results, which it is required to do under its state laws.