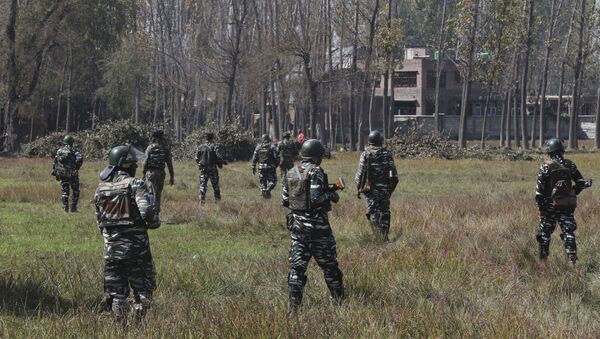 Shweta Sharma
Sputnik correspondent
All materialsWrite to the author
Security officials in India have recently revealed that alleged attempts by Pakistan to smuggle terrorists into Jammu and Kashmir will probably increase before heavy snowfall in the valley when mountain passes are blocked, restricts movement. India has accused Pakistan of sponsoring terrorism in Kashmir, an allegation Islamabad denies.

At least 11 Indians died and more than 20 were hurt in a cross-border attack by Pakistan in the Kashmir region on Friday, the Indian army was quoted by media as saying.

Army spokesman Rajesh Kalia said Pakistan used a variety of weapons including mortars, according to The Hindu website. There were four army personnel, a border guard and six civilians among those killed.

​In a retaliatory fire, at least 11 Pakistani soldiers were killed and 16 were injured, according to sources in Idian Armed Forces.

​India's and Pakistan's armies have exchanged heavy mortar firefight along the Line of Control (LoC) at three places in Jammu and Kashmir, Indian Army officials confirmed on Friday.

According to the army, the exchange of fire took place after India thwarted a botched bid to infiltrate the Keran sector of North Kashmir's Kupwara district.

"Suspicious movement was observed by our troops at the forward posts along the Line of Control in the Keran Sector on Friday. The suspected infiltration bid was foiled by our alert troops. This was accompanied by the initiation of an unprovoked Ceasefire Violation by Pakistan along the LoC in Keran Sector by firing mortars and other weapons. We are giving an appropriate response," Indian Defense Ministry spokesman Colonel Rajesh Kalia said in a statement.

He added that the firing is taking place at various posts on the border between India and Pakistan from the Keran to Uri sectors.

This was the second attempt by unidentified people to cross the border illegally. Earlier, three reported terrorists were killed after the infiltration bid was foiled in the Machhal sector between 7 and 8 November.

Meanwhile, internet services have been blocked in Kupwara, near the Keran sector, as a precautionary measure.

On Friday morning, Pakistan's army claimed that one civilian had been killed and three others injured in cross-border fire by Indian troops in the Rakhchikri and Khanjar sectors. A Pakistan Army spokesman claimed that Indian troops targeted the civilian population with rockets and mortars.

India and Pakistan have accused each other of violating the ceasefire and targeting civilians in the cross-border firefight. The two countries have fought two wars over Jammu and Kashmir, an area claimed by both fully but controlled in part. Both have accusations the other side of sponsoring terrorism. Diplomatic ties between New Delhi and Islamabad deteriorated when India revoked the special status of Jammu and Kashmir in August 2019.