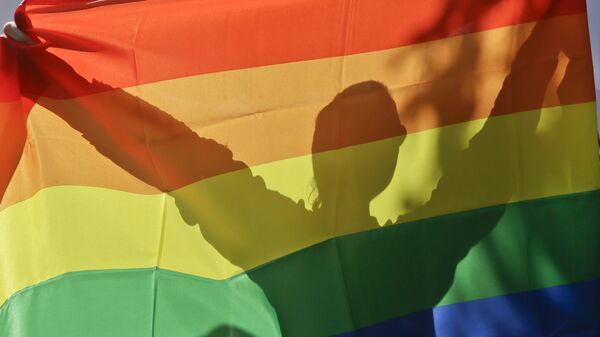 © AP Photo / Efrem Lukatsky
Subscribe
International
India
Africa
Igor Kuznetsov
All materials
Sweden's Moderate Party has argued that the country can take in Estonia's homosexuals, and provide the latter with Swedish homophobes, describing it as a "win-win situation".

In response to Estonian Interior Minister Mart Helme's remarks about homosexuals, the Swedish liberal-conservative Moderate Party has arranged a demonstration outside the Estonian parliament and even proposed a population exchange.

In an interview with Deutsche Welle, the leader of the Conservative People's Party of Estonia (EKRE) made what many saw as disparaging remarks about homosexuals, arguing that they would be better off in Sweden than in Estonia.

"Let them run to Sweden. Everyone there treats them more politely", Helme said, admitting that he is "not friendly to them".

In response, the Swedish Moderates branch in Tallinn held a demonstration in Estonia's capital against Helme's "illiberal" attitudes, handing out leaflets proposing, perhaps on a more fun note, a strategic population exhange between the two countries. The leaflets were adorned with the party's logo in rainbow colours.

According to the Moderates, Sweden can take in Estonia's homosexuals, and provide it with Swedish homophobes in return, something which has been described as a "win-win situation". Placing it in a historic context, they recalled that Sweden took in "boat refugees" from Estonia in 1944 and is ready to receive "gay refugees" in 2020.

"It is clear that it is nasty. There must be room for a little political irony in the political work", Anders Hedman, the chairman of the Swedish Moderate Party's Tallinn branch, told Finnish national broadcaster Yle. "All people have the right to choose their own sexual orientation in life, it is not something politicians should decide", Hedman underscored.

According to Hedman, this marks a confrontation between classical liberalism and a new brand of social conservatism. Furthermore, he views EKRE's nationalist social-conservative agenda as a return to the "authoritarian" post-war Soviet era.

"To be conservative in the Western sense of the word is to stand up for all people's freedom and equal human value", Hedman underscored.

Sweden is seen as one of the most progressive nations in Europe regarding LGBT rights. Homosexual activity was decriminalised in 1944. After allowing same-sex couples to register for partnership benefits in 1995, Sweden legalised same-sex marriage countrywide in 2009. Gay and lesbian couples have enjoyed the right to adopt since 2003. Sweden's LGBT-friendly image has been consistently backed with polls indicating that a large majority of Swedes support LGBT rights and same-sex marriage. For instance, the 2019 Eurobarometer showed that 98 percent of Swedes believed gay and bisexual people should enjoy the same rights as heterosexual people, and 92 percent supported same-sex marriage, the highest in the European Union.