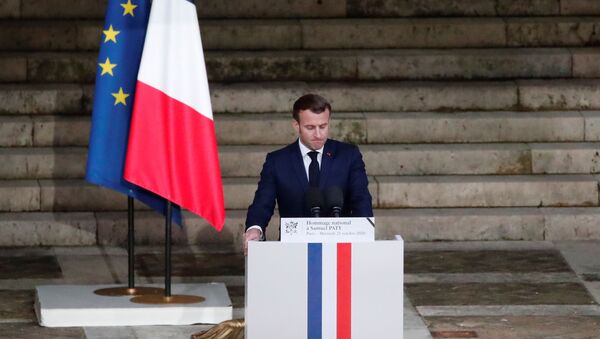 "We will continue, professor. We will defend the freedom that you taught so well and we will be secular, we will not renounce caricatures, illustrations, even if others step back," Macron said in his address outside the Sorbonne University in Paris, as broadcast by the Elysee Palace on its Twitter account.

According to the French leader, the teacher became a victim of a "fatal conspiracy, of amalgamation" and of "hatred of the other [person]."

Last week, France was shaken when Paty was beheaded by an 18-year-old man of Chechen origin in the outskirts of Paris after he showed cartoons of Islamic prophet Mohammad to his students, apparently prompting outrage among some of Muslim parents. The killer was shot dead by police the same day. An inquiry into the incident is underway.

The history teacher became the face of France's desire to break down terrorism and eliminate Islamism.

The government has ordered the implementation of a series of measures in the fight against Islamist threat, with Macron describing the killing as a "terrorist attack."