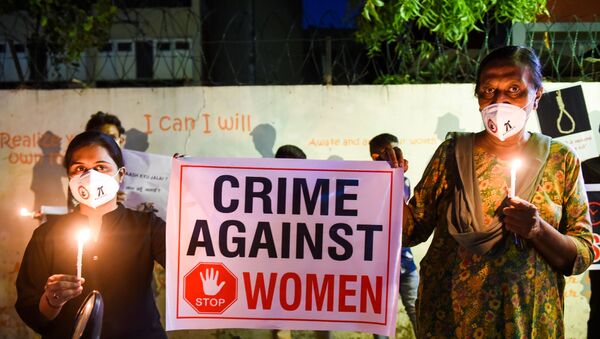 Shweta Sharma
Sputnik correspondent
All materialsWrite to the author
A barrage of remarks defending the four accused has followed in the aftermath of the reported gang rape of a Dalit girl from Hathras, an incident that has hogged the headlines in Indian media for its brutality. While protests have erupted in the country over the case, some people have called the outcry an attempt to trigger a caste conflict.

A governing Bharatiya Janata Party politician from Uttar Pradesh state, Ranjeet Bahadur Srivastava, has blamed the 19-year-old woman, a deceased rape victim, for what happened to her, saying that she might have been involved in an affair with one of the four accused and had called him to the millet field.

In a video going viral on social media, the politician from Uttar Pradesh’s Barabanki city said: "The victim must have called the boy to the field because they were having an affair. This news is already out on social media and news channels. She must have gotten caught".

This is the mind set of @BJP4India leader Ranjeet Shrivastav from Barabanki... @NCWIndia @sharmarekha would your kind office dare to book such mindset’s? pic.twitter.com/4cYUZsjBx9

"I can say with guarantee these boys are innocent. If they are not released in time, they will keep facing mental harassment. Who will return their lost youth? Will the government give them compensation?" he said, siding with the accused.

The statement is not first of its kind over the sensational gang rape case. Earlier, former Supreme Court Judge Markandey Katju courted massive controversy by saying “sex is a natural urge in men” and said that the rising unemployment is to blame for the uptick in rape cases.

In another statement, a BJP politician claimed that rapes will stop if parents teach their daughters "proper values", while another held a rally in support of the accused in the Hathras gang rape.

The repeated "distasteful" statements have irked people in the country, with some social media users chiding the politicians with sharp responses.

@smritiirani It's not right for you to silently watch all this just because this guy is from your party ! You are supported to be a minister for women & child development for the entire country, right ?

I dont think top leadership of @BJP4India will endorse the views of this MP. In my opinion some action should be taken against him for such dirty statements and no ticket should be given in future.

Ma'm one thing wud like to point tat it is very much unfortunate tat we are ruled by such leaders.But it is also worse that people keeping that mentality are in large numbers irrespective of their religion,caste,ideology and sick patriarchy is prevalent.This issue is larger.Think

​According to Indian media, on 14 September a 19-year-old lower caste woman from Hathras in Uttar Pradesh was dragged to a farm by upper caste men. The woman was gravely injured by the men, with her spine broken.