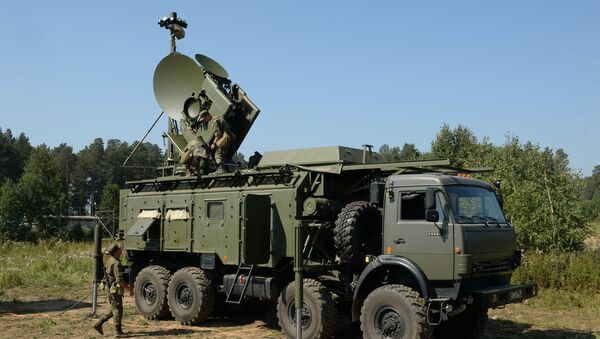 Morgan Artyukhina
All materialsWrite to the author
US Army officials unveiled plans on Tuesday for a vehicle-mounted electronic jamming system that will uniquely have the ability to jam incoming projectiles, fouling their targeting in the moments before impact.

At the Army’s CEMAlite conference on Tuesday, three Army colonels discussed a new electronic warfare system they hope to employ in the coming years to disrupt enemy weapons systems even more than the Terrestrial Layer System (TLS) already under development.

The TLS is designed to operate at the brigade level and will fit on a Stryker armored vehicle. However, the system unveiled on Tuesday will be considerably more powerful, and is thus dubbed the TLS-Echelons Above Brigade (TLS-EAB), Breaking Defense reported.

According to the outlet, the system will likely be mounted on two Oshkosh Family of Medium Tactical Vehicle (FMTV) trucks, each of which will cover different responsibilities. Together, they will be able to locate enemy signals and relay the information for other forces to attack, as well as identify and track incoming weapons, such as missiles, artillery shells and drones, in order to jam them.

Breaking Defense reports the TLS-EAB will employ a number of deceptive practices to make incoming projectiles lose their targets, including electronic jamming, wireless hacking and sending deceptive signals in order to create decoys. Since so many modern weapons rely on GPS tracking and radar for guidance and detonation, this makes them especially vulnerable to electronic warfare.

Like other air defense systems, the TLS will be able to plug into the Integrated Battle Command System (IBCS) being tested at the White Sands Missile Range in New Mexico, giving it the ability to both send and receive information from other radar systems and weapons systems in the network.

The US Army Combined Arms Center (CAC) first outlined the Echelons Above Brigade combined arms concept in 2018 as part of the Multi-Domain Operations Concept, noting its necessity as part of a shift in strategic thinking concurrent with the Trump administration’s shift away from the War on Terror. The CAC notes that “we find ourselves entering a new era where the threat of large-scale ground combat is more likely than at any point since the end of the Cold War.”

The new US Space Force (USSF) is also concerned with jamming and counter-jamming efforts, and the branch’s new “Spacepower” doctrine notes that because space assets are operated by surface-based personnel, space operations are also inherently multi-domain.

The first version of the TLS is expected to enter service in 2022, but the Army still hasn’t selected which version it will adopt: that built by Lockheed Martin or its rival firm, Boeing. However, Breaking Defense notes the TLS-EAB could be in service by the end of 2023.