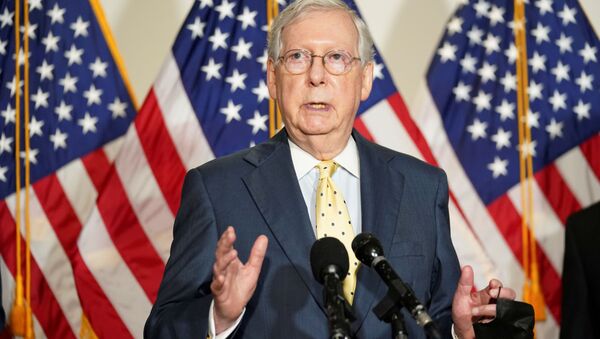 McConnell echoed comments made by Tim Scott, the Senate's only black Republican, about Trump's response to a challenge to condemn white supremacy at Tuesday night's presidential debate in Cleveland, Ohio.

“With regard to the white supremacy issue, I want to associate myself with the remarks of Senator Tim Scott,” McConnell told reporters. “I think he said it exactly correctly and that’s exactly how I would express myself on that issue."

“He said it was unacceptable not to condemn white supremacists and so I do so in the strongest possible way,” the Republican leader said.

Earlier on Wednesday Scott said Trump may have "misspoken" in response to the debate question.

“White supremacy should be denounced at every turn,” Scott said. “I think the president misspoke, and he needs to correct it. If he doesn’t correct it, I guess he didn’t misspeak.”

‘Chris Wallace is a Hack’: Moderator Under Fire After Heated Trump-Biden Debate
Trump turned Tuesday night's question into an attack on his Democratic rival Joe Biden, who he has accused of condoning violent 'antifa' protests and riots amid this summer's resurgence of the Black Live Matter movement.

“Almost everything I see is from the left wing, not from the right wing,” he said in a jab at Biden.

“I’m willing to do anything. I want to see peace,” Trump said. “What do you want to call them? Give me a name.”

Biden's response was that “Antifa’s an idea, not an organization.”

Trump tore into his opponent on Wednesday for failing to say the words "law and order" once during the 90-minute debate.