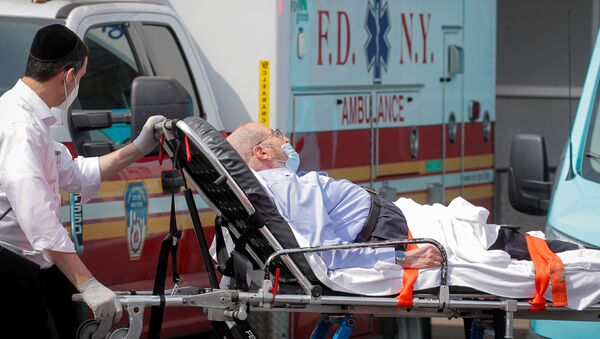 © REUTERS / BRENDAN MCDERMID
Subscribe
International
India
Africa
UNITED NATIONS (Sputnik) - The US government should stop blaming Beijing for spreading the novel coronavirus and take responsibility for the way it handled the outbreak in its own nation, the Chinese ambassador to the United Nations, Zhang Jun, said in a statement on Friday.

The UN Security Council held a meeting a day earlier on post-COVID-19 global governance, during which the US ambassador, Kelly Craft, citing US President Donald Trump's speech at the General Assembly, called for holding China accountable for "unleashing this plague into the world."

"I must say, enough is enough. You have created enough troubles for the world already," Zhang said. "The United States should understand that its failure in handling COVID-19 is totally its own fault."

Zhang noted that nearly 7 million people have been infected with the novel coronavirus in the United States and more than 200,000 have died.

"With the most advanced medical technologies and system in the world, why the US has turned out to have the most confirmed cases and fatalities?" Zhang asked.

"If someone should be held accountable, it should be a few US politicians themselves," the diplomat said, apparently referring to the administration of US President Donald Trump.

Zhang also noted that creating confrontation and division at the United Nations will not help to defeat the pandemic, as that approach has already seriously disrupted the efforts of the international community.

"The United States is now standing against the international community, and completely isolated. It's time to wake up," Zhang asserted.

In order to be a force for good, the United States must lead by example, promote cooperation among nations and contribute to humanity, Zhang added.