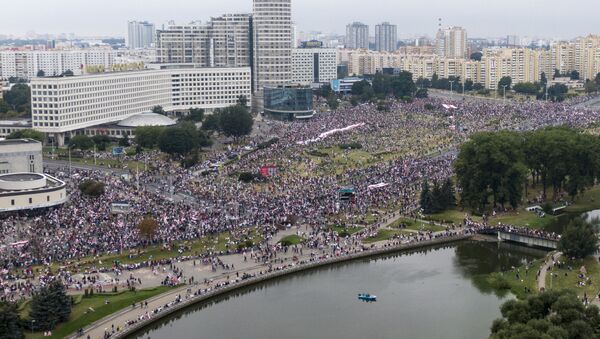 Belarusian President Alexander Lukashenko secured his sixth term as the country's leader as a result of the 9 August presidential elections, which was decisively rejected by opposition and followed by weeks of nationwide protests.

The Belarusian Interior Ministry said that 5,000 people had taken part in 59 rallies that rocked the country on Wednesday. The ministry also pointed to the "aggressive nature" of the rallies, reporting "overt clashes" between protesters and the police.

"Stones and other items were thrown at law enforcement agents in a bid to inflict bodily harm," the Belarusian Interior Ministry went on to say, adding that some police officers were injured.

According to the ministry, a total of 364 people were detained across Belarus for violating the rules which pertain to public demonstrations.

"A total of 364 citizens, including 252 people in Minsk, were detained yesterday for violating the mass events regulations. As many as 320 people were placed in detention centers pending administrative offenses hearings," the Belarusian Interior Ministry wrote on Telegram.

According to the Interior Ministry, most of the protesters were under the age of 30.

Wednesday protests erupted after Alexander Lukashenko was sworn in as the president of Belarus. While the ceremony was not publicly announced in advance, dozens of people were present at his inauguration at the Palace of Independence, including officials, lawmakers, athletes and media personalities.

Belta News Agency reported that Lukashenko put his hand on the constitution and took the oath of office in the Belarusian language. He then received the certificate of the President of Belarus from the chair of the Central Electoral Commission.

Alexander Lukashenko said that his inauguration was not 'secret' and around 2,000 people were invited.

Presidential elections were held in Belarus on 9 August, which, according to the Central Election Commission (CEC), were won by Lukashenko, who gained 80.1 percent of the vote. The Belarusian opposition, however, claimed that ex-Belarusian presidential candidate Svetlana Tikhanovskaya, not Lukashenko, had won.

The results of the vote triggered opposition protests began across Belarus. In the first days, the rallies were crushed by law enforcement officers: tear gas, water cannons, stun grenades and rubber bullets were used against the protesters who claimed that the election was rigged.

However, later the law enforcement agencies stopped dispersing the rallies and using force. In line with official data, over 6,700 people were detained in the first days. According to the Interior Ministry, hundreds of people were injured during riots, including more than 130 law enforcement officers. Three protesters died.