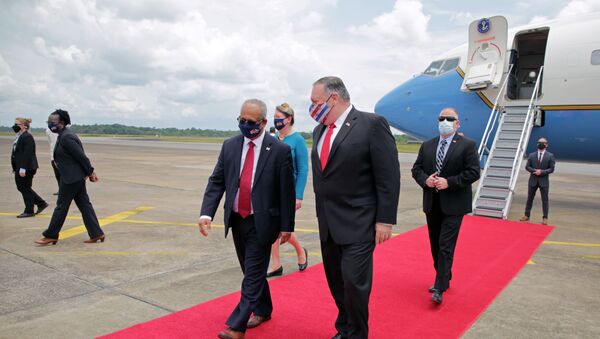 WASHINGTON (Sputnik) - US Secretary of State Mike Pompeo said during his visit to Suriname on Thursday that China is leveraging economic investment to exact political influence inconsistent with the best interests of the people.

"We’ve watched the Chinese Communist Party invest in countries and it all seems great at the front end, and then it all comes falling down when the political cost connected to that becomes clear", Pompeo said. "[The Chinese] often show up in ways that are inconsistent with the values that I’ve heard [Surinamese President Chan Santokhi] speak about, the things that are best for the people of Suriname".

Pompeo noted that the United States welcomes what he called was true Chinese competition, but such competition does not happen very often under the leadership of Chinese President Xi Jinping.

The secretary of state went on to highlight the merits of US businesses to enter a new market, including intolerance for corruption and crony capitalism.

Pompeo is the first US secretary of state to visit Suriname. During his visit, he will meet with US oil and mining companies that have expressed interest in the newfound oil reserves in Suriname and neighboring Guyana.

Pompeo is scheduled to visit Guyana next after his stop in Suriname.