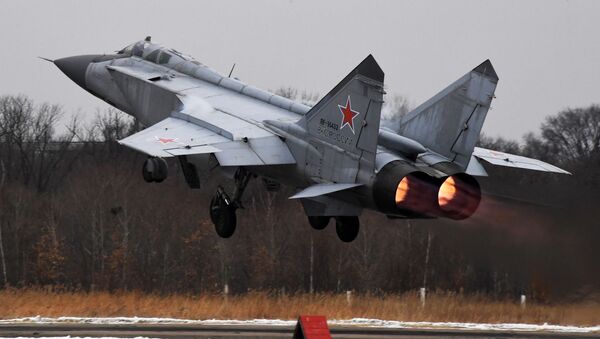 MOSCOW (Sputnik) - Russian fighters were scrambled to escort a US Air Force's strategic bomber flying over the Bering Sea and the Sea of Okhotsk, the Russian Defense Ministry said on Tuesday.

Russia's airspace control means detected a target above the Bering Sea, which was approaching the Russian border, the ministry said. After that, the fighters were scrambled in order to prevent a violation of the border.

"A MiG-31 fighter of the Pacific Fleet's naval aviation and a Su-35S fighter of the Eastern Military District escorted the US Air Force's B-1В Lancer strategic bomber in the airspace over the waters of the Bering Sea and the Sea of Okhotsk," the Russian Defence Ministry said in a statement.

"The Russian fighters returned safely to the home airfield after escorting the foreign plane," the statement read on.

The announcement comes amid intensified NATO intelligence activity near the Russian border. NATO spy aircraft have been detected almost daily in the airspace close to Russia over the past month.