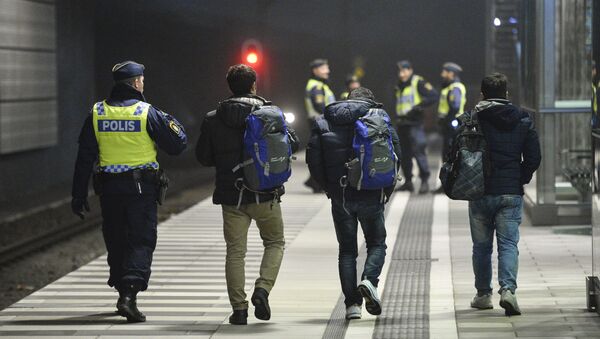 © REUTERS / Johan Nilsson
Subscribe
Igor Kuznetsov
All materials
The ruling Social Democrats, who have led Sweden throughout most of the 20th century, appear to have directly benefited from immigration, as research indicates the majority of immigrants tend to vote for left-of-the-centre parties, such as the Social Democrats and their allies, the Greens.

Sweden's Social Democrat Prime Minister Stefan Löfven, who during his time in office has consistently denied any link between mass immigration and crime, appears to have changed his tune on this issue.

“A large immigration, where we can not cope with the integration, also brings a greater risk of the type of problems we see. It is crystal clear,” Löfven said during a parliamentary debate when pressured by Sweden Democrats leader Jimmie Åkesson.

Subsequently Löfven explained himself in an interview with the national broadcaster SVT.

“If you have immigration of such scope that you can not cope with the integration, then it is clear that you get social tensions in society, and that is not good,” Löfven told national broadcaster SVT. “We've had it. And that is why the government I lead has made sure to change its immigration policy,” Löfven continued.

“We have had such immigration, that means that we are no longer managing integration properly. If there are not enough adults coming to work, the children may think that this is normal, which means other social tensions. So yes, it is a problem and that is why the government I lead has changed the migration policy, so now we take in significantly fewer,” said Löfven.

SVT's domestic policy commentator Mats Knutson noted that it marks the first time Löfven has ever admitted a link between immigration and the development of crime.

“He has not done that before. On the contrary, he has reflexively dismissed all possible connections here, and this has led to criticism from the opposition, especially the Sweden Democrats and the Moderates, becoming increasingly harsh,” Knutson noted. According to Knutson, the change of language reflects the necessity for the Social Democrats to keep up with the debate on immigration and gang crime.

Earlier this week, Swedish deputy police chief Mats Löving warned that at least 40 crime families have established themselves in Sweden solely for the purpose of organised crime and have been gaining more traction in recent times. This has sparked debates about the failures and shortcomings of Sweden's open-doors immigration policy.

Löfven's perceived reversal has added fuel to the fire.

“As of 21.00 tonight, Stefan Löfven decided that it is no longer racist to link immigration with crime,” Moderate MP Arin Karapet tweeted. “Yesterday it was racist, fascist and indecent to make that connection. Something dramatic has happened in the last 24 hours, and reality has caught up with the Social Democrats,” he added.

​“Just so you know, whoever saw the connection BEFORE Löfven was indecent at best and racist at worst, and whoever sees them NOW is simply wise and insightful,” Alice Teodorescu Måwe of the Moderate Party tweeted.

​“I'm confused... Does this mean that Löfven is a racist Nazi fascist now?” another Twitter user asked wryly, parroting the Social Democrats' own rhetoric toward opponents of mass immigration.

​Until the 1990s Sweden was one of Europe's most homogeneous nations. Following decades of mass immigration, however, the share of immigrants and their descendants has quickly soared to around a quarter of the Swedish population of over 10 million. The Social Democrats appear to have benefited from immigration, as the majority of immigrants tend to vote for left-of-the-centre parties, including the Social Democrats, who have led Sweden for the most part of the 20th century.

According to Tobias Hübinette, a researcher in minorities, whiteness and “Swedishness”, 52.8 percent of all children in major cities are of immigrant descent. Depending on the rate of immigration and demographic trends, ethnic Swedes have projected to become a minority in their own country anywhere between 2040 and 2065.

000000
Popular comments
It was inevitable since he by all estimates are about to lose the next election to Sweden Democrats who want the chaos-migrants out of the country already. Still, no ethnic swede vote for the social Democrats anymore, and this is the party of Olof Palme mind you , their entire voting base nowadays is, you guessed, Muslim chaos- migrants who get to invite all kinds of relatives and friends for swedish citizenship as long as they vote S and that's what they do. Sweden is a cesspool of 2.5 million of the worst kind of criminal medieval Muslims from the most backward dictatorships there is. You can't motivate these parasites to go back home or elsewhere unless you cut their life time social welfare checks and other subsidies but if you do THAT all h*ll break loose.

(real)mikhas....
11 September 2020, 10:04 GMT8
000000
"“If you have immigration of such scope that you can not cope with the integration, then it is clear that you get social tensions in society, and that is not good,” It would be interesting if Mr. Lovfen could name us one western country where the moslems were successfully "integrated" into the civilized society.
LDJUKIC
11 September 2020, 09:42 GMT7
000000
Newsfeed
0
New firstOld first
loader
LIVE
Заголовок открываемого материала
Access to the chat has been blocked for violating the rules . You will be able to participate again through:∞. If you do not agree with the blocking, please use the feedback form
The discussion is closed. You can participate in the discussion within 24 hours after the publication of the article.
To participate in the discussion
log in or register
loader
Chats
Заголовок открываемого материала
Worldwide
InternationalEnglishEnglishMundoEspañolSpanish
Europe
DeutschlandDeutschGermanFranceFrançaisFrenchΕλλάδαΕλληνικάGreekItaliaItalianoItalianČeská republikaČeštinaCzechPolskaPolskiPolishСрбиjаСрпскиSerbianLatvijaLatviešuLatvianLietuvaLietuviųLithuanianMoldovaMoldoveneascăMoldavianБеларусьБеларускiBelarusian
Transcaucasia
ԱրմենիաՀայերենArmenianАҧсныАҧсышәалаAbkhazХуссар ИрыстонИронауОssetianსაქართველოქართულიGeorgianAzərbaycanАzərbaycancaAzerbaijani
Middle East
Sputnik عربيArabicArabicTürkiyeTürkçeTurkishSputnik ایرانPersianPersianSputnik افغانستانDariDari
Central Asia
ҚазақстанҚазақ тіліKazakhКыргызстанКыргызчаKyrgyzOʻzbekistonЎзбекчаUzbekТоҷикистонТоҷикӣTajik
East & Southeast Asia
Việt NamTiếng ViệtVietnamese日本日本語Japanese俄罗斯卫星通讯社中文（简体）Chinese (simplified)俄罗斯卫星通讯社中文（繁体）Chinese (traditional)
South America
BrasilPortuguêsPortuguese
NewsfeedBreaking
07:27 GMTRegistration Cock-Up: Hundreds of Finnish Cars Get Number Plates With Word 'D**k'
07:27 GMTSPD’s Olaf Scholz Declares He Has Mandate to Form New German Government With Greens, FDP
07:26 GMT'Against Established Science': Swedish Doctors Pen Open Letter Against Vaccination of 12-Year-Olds
07:15 GMTTrans Rights Clash in Britain: Conservatives and Labour Can't Decide 'Who Has a Cervix'
07:01 GMTRussia's Security Service Detains Five Neo-Nazis Planning Terror Attack in Bashkiria
06:54 GMTDoctors in Israel 'Angry' at COVID-19 Patients Who Refused Vaccination
06:23 GMTPowerful 6.5-Magnitude Earthquake Strikes Crete, Greece
05:42 GMTBoJo Mulls Scrambling Army to Deliver Fuel Amid Panic Buying Triggered By HGV Driver Shortfall
05:30 GMTGerman Foreign Minister Wins Direct Mandate in Saarlouis District
05:25 GMTNorway's Post-COVID-19 Re-Opening Turns 'Life-Threatening' Amid Drunken Street Fights
05:24 GMTLive Outside Christian Democratic Union HQ After German Elections
04:36 GMTTrump's Georgia Rally: How Could 'Election Fraud' Card Play Out for Republicans in 2022 Midterms?
04:12 GMTNorth Korea's KCNA Labels US 'Most Heinous Human Rights Abuser'
03:00 GMTRome Says G20 Summit on Afghanistan Expected in Coming Weeks
02:51 GMTGermany's Social Democrats Win Election After Gaining 25.7% of Votes
02:24 GMTMerkel's District in Mecklenburg-Western Pomerania Falls Into SPD's Hands
02:17 GMTTexas Gov. Abbott Vows to Employ US Border Patrol Agents Whose Jobs Are 'At Risk' by Biden Admin
02:05 GMT'You F'd Up Your Presidency': Graham Reportedly Blasted Trump After He Refused to Concede Election
01:31 GMTRussian Embassy Calls on US Authorities to Ensure That Yaroshenko Gets Medical Assistance
00:57 GMTIAEA Claims Iran Failed to Fully Honor Agreement on Nuclear Monitoring Equipment