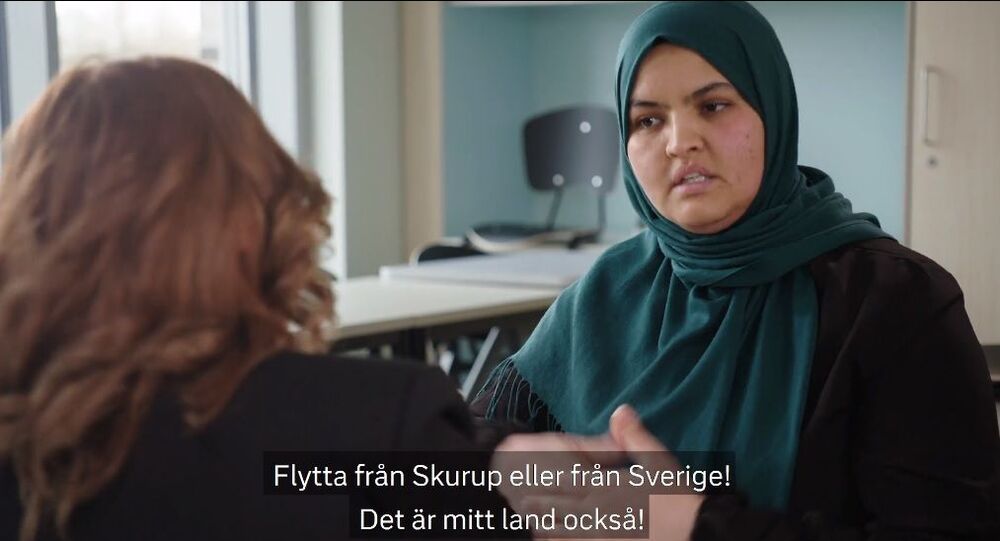 In late 2019, Skurup Municipality in Sweden's southernmost province of Skåne adopted a ban on religious headwear, triggering a nationwide discussion on the role of Islam in Swedish society.

Tensions have heated up in the recent episode of Swedish national broadcaster SVT's programme The Meeting, where the local ban on religious headdress in the Skurup Municipality was discussed.

The ban, which was met with resistance from local Muslims and their sympathisers, applies to pupils and staff in the municipality's preschools and primary schools.

In the debate, local centre-right Moderate Party politician Loubna Stensåker Göransson, who supports the ban, was pitted against local teacher Naouel Aissaoui, who has chosen to defy the ban. Despite both women being Muslims and immigrants, they turned out to have completely opposite positions regarding the hijab.

“I feel confident and strong with my faith that says that God is greater than Skurup Municipality and its decision,” Aissaoui proclaimed, stressing that the veil is associated with “purity”.

Loubna Stensåker Göransson, who chairs the local school and education committee in Skurup, argued that religion was “not in the clothes” and associated the hijab with oppression of women, religious indoctrination and sexualisation of little girls. When she confessed to being annoyed by the sight of small children in the veil, a verbal skirmish erupted.

“Well, move away then if it annoys you. Move away from Skurup or from Sweden. That is my country, too,” Aissaoui replied, accusing her opponent of “pure racism”.

Stensåker Göransson countered by suggesting that the new arrivals should adapt to the prevailing culture.

“You cannot come to a country that is secular and equal and live with medieval values,” she said.

“Now the Muslims are starting to urge us Swedes to leave our country,” one mused, adding that there “must be a stop to refugees' racist attacks on us Swedes”.

​“What a terrible attitude. The lady in the veil showed zero empathy, zero understanding and went into attack mode instead”, another one said.

​“This may be the most disgusting clip I've seen this year. In principle, an immigrant says to all Swedes: 'You are racists. If you dislike the veil on children, you can move away from here'. This is NOT your country. Adapt yourself or GO HOME, you and your medieval religion. Damn what the hell,” Yemeni-Swedish journalist Luai Ahmed wrote.

​The number of Muslims in Sweden has soared in a matter of several decades, exceeding 800,000 and amounting to 8.1 percent of today's population, according to the Pew Research Centre. In recent years, a broad debate on the place and the role of Islam in Swedish society has been going on.