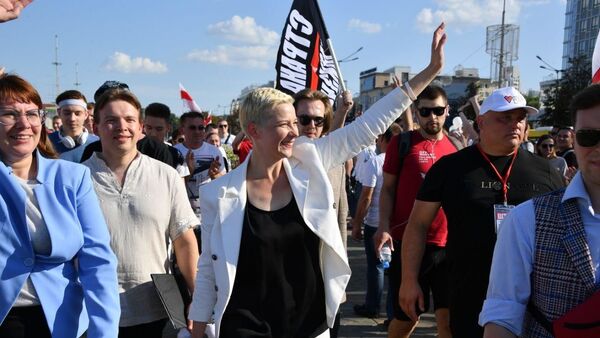 MINSK (Sputnik) - Maria Kolesnikova, a high-ranking member of the Belarusian opposition’s Coordination Council, vanished during a trip to a post office in Minsk after she was sent a copy of a police notice on an administrative offence she committed by attending an unauthorised rally in August, a fellow council member said Monday.

Relatives of Maria Kolesnikova, member of the Belarusian opposition coordination council's presidium, filed a missing person report with the police about her disappearance, the police accepted it and began search, the headquarters of former presidential contender Viktor Babariko said.

"We agreed that she would go to the post office to fetch a letter from the central police department … Eye-witnesses say they got her into a minivan with the word ‘communications’ written on it and took her to an unknown location", Maxim Znak said during a live streaming event on YouTube.

The council uploaded a dash cam video to the internet earlier in the day allegedly showing Kolesnikova’s arrest just past 10:00 a.m. (7:00 GMT). Znak said they had not heard from her for more than 8 hours.

According to the council's press service, three team members — Kolesnikova, Rodnenkov, and Ivan Kravtsov — are impossible to reach, but lawyers are looking for them. The financial investigation department of the State Control Committee searched Kravtsov's apartment, the press service of another opposition figure, Viktor Babriko, said. The press service of the committee declined to comment.

Belarusian Opposition Politicians Announce Creation of New Political Party
The council was created in Belarus in the wake of the 9 August presidential election to oversee the transfer of power as the opposition rejected the reelection of incumbent President Alexander Lukashenko. The chief prosecutor’s office opened a criminal probe into the council over national security concerns.

Mass opposition protests were held across Belarus following the election which saw Lukashenko reelected for a sixth term.

Police cracked down on protesters during the first several days of the unrest, but have since halted the excessive use of force. More than 6,700 people were detained during the initial phase of the protest. According to the Belarusian Interior Ministry, three people died and several hundred others sustained injuries during that period, including more than 130 security officers.