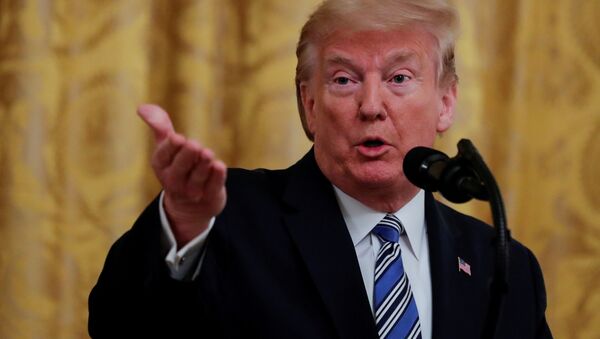 Oleg Burunov
All materialsWrite to the author
On Monday, Donald Trump told the Republican National Convention that the 3 November vote will be “the most important election in the history” of the United States.

President Donald Trump is due to formally accept the nomination for a second term when delivering a keynote speech during the fourth and final day of the Republican National Convention (RNC) later on Thursday.

Trump, who will address the nation on the White House South Lawn, is expected to focus on his current record in office and outline a blueprint for the next four years.

Reuters cited an unnamed Trump campaign official as saying that POTUS will reveal his policy plans both during the RNC gathering and subsequent speeches on the campaign trail.

Apart from the US president, also speaking at the RNC on Thursday will reportedly be Republican Senate Majority Leader Mitch McConnell, Secretary of Housing and Urban Development Ben Carson, as well as attorney Rudy Giuliani and religious leader Franklin Graham.

Trump’s address will come after day three of the RNC, during which Vice President Mike Pence touted Trump's strengthening of the US military and the establishment of the country’s Space Force.

“This president signed the largest increase in our national defence since the days of Ronald Reagan and created the first new branch of our armed forces in 70 years: the United States Space Force”, Pence underscored.

He spent most of his speech praising the Trump campaign’s support for religious freedom and free markets, slamming the Democrats' "radical" agenda of government control and supporting Trump’s call for “law and order” amid looting, arson, and rioting across the US, caused by shootings and the deaths of Black people at the hands of police.

Pence’s speech came after the US president’s surprise appearance at the RNC on Monday, when Trump minced no words as he blamed the Democrats for seeking to steal the 3 November presidential election by advocating for mail-in voting.

“This is the most important election in the history of our country. […] This is the biggest”, POTUS added in remarks that come amid opinion polls indicating Democratic presidential hopeful Joe Biden’s lead over Trump.

Trump Claims 2020 Election Will Be ‘Most Rigged’ With Usage of Mail-In Ballots
The remarks followed Trump insisting last week that while absentee voting was good, vote-by-mail was “very bad” and subject to election fraud.

“Universal mail-in voting is going to be catastrophic, it’s going to make our country a laughing stock all over the world”, POTUS pointed out. He added that it could take “months” to determine the result of November’s elections, and blamed the Democrats for not approving “proper funding” for the postal service.