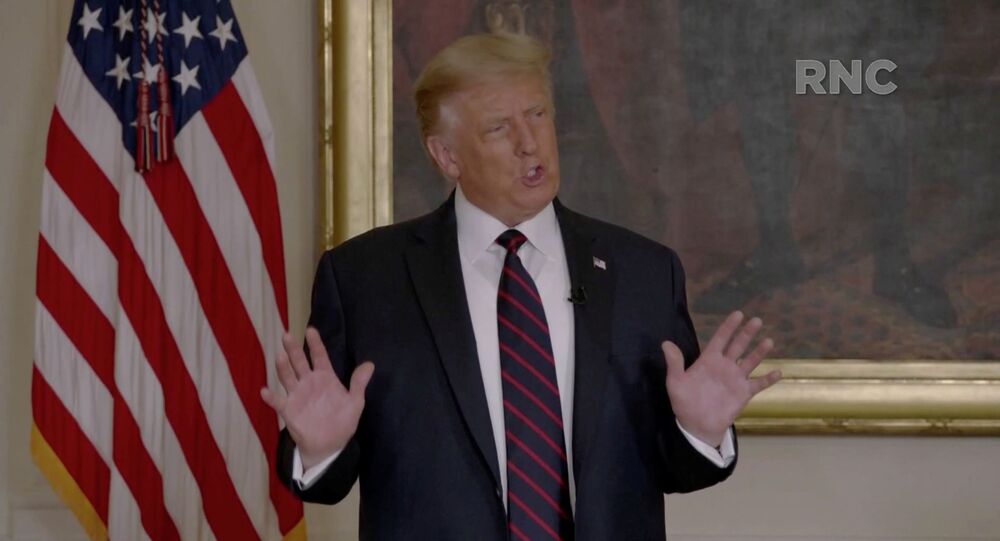 Pence delivered his keynote remarks from Fort McHenry in Baltimore on Wednesday, where the American national anthem was inspired during the War of 1812.  During the speech he formally accepted the party's vice presidential nomination.

During his speech, Pence highlighted Trump's building up of the US military, establishment of the space force and promised that the Trump administration would deliver a "safe" vaccine by the end of the year.

“We rebuilt our military. This president signed the largest increase in our national defense since the days of Ronald Reagan and created the first new branch of our armed forces in 70 years: the United States Space Force. We also returned American astronauts to space on an American rocket for the first time in nearly ten years," Pence said.

As far as law enforcement, Pence said the administration supports peaceful protests but the violence must stop in cities like Kenosha, Wisconsin, Minneapolis and Portland. Pence's comments come in the wake of a police shooting that paralyzed a Black man in Kenosha.

Pence spent most of his speech attacking Biden, contrasting the Trump tickets support for religious freedom and free markets versus the Democrats' "radical" agenda of government control. Pence accused Biden of being a cheerleader for communist China and of wanting to rescind the tariffs and end fracking.

The vice president continued the Trump campaign's line that Biden supports defunding police. He said Americans would not be safe if Biden is elected. However, Biden has repeatedly said he does not support defunding police.

Kellogg added that Trump is not a war hawk and believes in seeking peace rather than conflict. He mentioned his US-brokered deal between Israel and the United Arab Emirates.

Congressman Dan Crenshaw, a former Navy SEAL who lost his right eye in combat, said the US president rebuilt the military and equipped America's "heroes" to defeat IS and to ensure "freedom prevails." The congressman went on to explain why America is exceptional among nations.

"Here is the truth about America. We are a country of heroes. We are a people with a common set of ideals conceived in liberty. People that have sacrificed time and again for our freedom and the freedom of others. That’s something no other country every anywhere can claim," the lawmaker said in a video clip.

Rep. Dan Crenshaw: “America’s heroism isn’t relegated to the battlefield,” we are “a nation of heroes” #RNC2020https://t.co/eqLDTDAmCC pic.twitter.com/eQg7cmDYdP

Outgoing White House counselor Kellyanne Conway said Trump has been sympathetic towards Americans and working to give the less fortunate the best opportunities to succeed. She also said Trump has taken action to battle the United States' drug crisis. Conway said for decades Trump elevated women to senior positions in business and in government and respected their advice and insisted they are on the same footing.

Senator Marsha Blackburn talked in support of law enforcement and members of the US military while accusing Democrats of trying to "cancel" them and their sense of service. She also claimed Democratic presidential nominee Joe Biden is trying to destroy America's "heroes."

Blackburn said Biden would keep Americans locked in their homes amid the COVID-19 pandemic until they depended entirely on the government, mirroring what she described as actions from Communist China.

Michael McHale, the president of the national association of police organizations, said his organization endorsed Trump partly because of the president's effort to aggressively prosecute those who attack officers.. He said unlike failed officials in Portland, Minneapolis, Chicago and New York who have not supported law enforcement.

White House Press secretary Kayleigh McEnany slammed those who want to take God out of the classroom and the pledge of allegiance.

Former US national intelligence director and ambassador to Germany, Richard Grenell, blamed the administrations before Trump for seeking "unlimited globalization." As Washington politicians built a global system, American wages stagnated and manufacturing plants were shipped off to China, he said.

Democratic vice presidential nominee Kamala Harris is expected to give a rebuttal after the RNC.

On Tuesday, the Republicans hammered Joe Biden for his support of wars and reached out to immigrants. Key speakers included President Trump's wife Melania and Secretary of State Mike Pompeo. On Monday, the RNC focused on Trump's economic plan, handling of the COVID-19 crisis and law enforcement with Donald Trump Jr. and former ambassador Nikki Haley as the main speakers.

The RNC kicked off in Charlotte, North Carolina on Monday, but has been a combination of virtual recordings and live segments. Trump has appeared on both nights in live shots from the White House. Melania delivered Tuesday night's speech on the White House lawn before a crowd of family, friends and administration officials and other personnel.

Trump, who was formally nominated on Monday, is scheduled to give his acceptance speech on the south lawn of the White House on Thursday, the fourth and final night of the Republican convention.