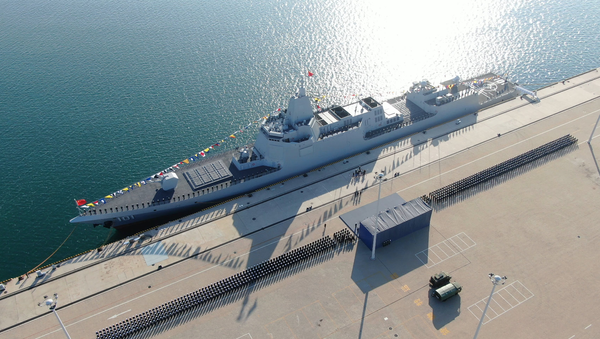 © Sputnik Screenshot
Subscribe
New reports from Chinese social media platforms Weibo and WeChat reveal that Beijing’s eighth and final Type 055 destroyer may be ready for launch soon, as the stealth guided-missile destroyer was spotted receiving a new paint job at a Dalian shipyard.

The eighth and final Type 055 destroyer in the People Liberation Army Navy’s (PLAN) first group of the ships was recently seen being painted at a shipyard in Dalian, indicating to many Chinese social media users that the advanced, 12,000-ton vessel will soon be ready for launch.

Citing naval experts, the South China Morning Post (SCMP) noted that it may take up to three years for all eight destroyers to enter into service. Furthermore, a realistic timetable for the entire group to be war-ready spans a five-year period, according to experts.

Lu Li Shih, a former instructor at Taiwan’s Naval Academy in Kaohsiung, explained to the outlet that this has to do with the vessels’ need to overcome potential electromagnetic interference issues.

“Unlike other destroyers equipped with complicated antenna devices on the masts, the Type 055 has the advanced enclosed integrated mast, which allows it to communicate with other platforms,” Lu said. “But that means more time is needed for them to go through complicated and comprehensive tests before they can join the navy.”

Sputnik reported back in January that the Nanchang, the first Type 055, had formally entered service approximately two and a half years after its launch. The vessel is the largest destroyer in service anywhere, after the US Navy’s 16,000-ton Zumwalt-class destroyer. However, Washington only has plans for three Zumwalts.

While the Nanchang participated in the PLAN portion of the 70th anniversary of the People's Republic of China celebration in October 2019, one Chinese military insider told the SCMP that many pieces of equipment, including “including radars, communications and weapons systems and other works – had not actually been finished.”

The warship can perform anti-submarine and anti-ship roles, as well as anti-aircraft, and even bombard shore targets. It is anticipated to serve as an escort to the PLAN’s burgeoning aircraft carrier fleet.

Observers spotted the second Type 055 heading out from Dalian on sea trials on Friday, signaling that it, too, may soon join the fleet.

A Wednesday report from War Industry Black Technology, a social media platform of the Shenzhen-based company Quantum Defense Cloud Technology, noted that in addition to carrier strike groups, the PLAN will form three amphibious assault groups composed of a Type 075 warship and a high-energy cannon-equipped Type 055 destroyer, according to the SCMP.

Nonyank
22 August 2020, 04:55 GMT7
000000
Steeldik, Navies, and especially surface ships are becoming a thing of the past, when one spends their money wisely, you get good quality results, unlike the behemoth (somewhat like its citizens) US forces, extremely inefficient with more than bloated costs, good luck going broke you exceptional Git!

What, me worry
22 August 2020, 05:12 GMT7
000000
Newsfeed
0
New firstOld first
loader
LIVE
Заголовок открываемого материала
Access to the chat has been blocked for violating the rules . You will be able to participate again through:∞. If you do not agree with the blocking, please use the feedback form
The discussion is closed. You can participate in the discussion within 24 hours after the publication of the article.
To participate in the discussion
log in or register
loader
Chats
Заголовок открываемого материала
Worldwide
InternationalEnglishEnglishMundoEspañolSpanish
Europe
DeutschlandDeutschGermanFranceFrançaisFrenchΕλλάδαΕλληνικάGreekItaliaItalianoItalianČeská republikaČeštinaCzechPolskaPolskiPolishСрбиjаСрпскиSerbianLatvijaLatviešuLatvianLietuvaLietuviųLithuanianMoldovaMoldoveneascăMoldavianБеларусьБеларускiBelarusian
Transcaucasia
ԱրմենիաՀայերենArmenianАҧсныАҧсышәалаAbkhazХуссар ИрыстонИронауОssetianსაქართველოქართულიGeorgianAzərbaycanАzərbaycancaAzerbaijani
Middle East
Sputnik عربيArabicArabicTürkiyeTürkçeTurkishSputnik ایرانPersianPersianSputnik افغانستانDariDari
Central Asia
ҚазақстанҚазақ тіліKazakhКыргызстанКыргызчаKyrgyzOʻzbekistonЎзбекчаUzbekТоҷикистонТоҷикӣTajik
East & Southeast Asia
Việt NamTiếng ViệtVietnamese日本日本語Japanese中国中文Chinese
South America
BrasilPortuguêsPortuguese
NewsfeedBreaking
01:00 GMTWho has the Edge Between Manchester United and Liverpool?
00:12 GMTBritish Military Brings Over 100 People Who Had Left Afghanistan to UK - Defense Ministry
YesterdayUS Seeking Clarity Over Turkey’s Intention to Declare US Ambassador Persona Non Grata
YesterdayUS Authorities Getting Veterans Involved in Resettlement on Afghan Refugees - Reports
YesterdayBiden’s Popularity Drops More Than That of Any Other US Leader Since End of WWII - Poll
Yesterday‘Rust’ Director ‘Gutted’ by Fatal Shooting of Halyna Hutchins on Set
YesterdayPotty-Mouthed PM: Broadcaster Blocks Boris Johnson's Remarks on Gay Men, Muslim Women
YesterdayHome Run! The Astros Win a Ticket to the World Series Amid Sign-Stealing Scandal
YesterdayColombian Authorities Reportedly Capture Elusive Drug Lord Otoniel, Leader of Clan del Golfo
YesterdayTwitter CEO Jack Dorsey Issues Cryptic Warning of ‘Hyperinflation’ Soon To Happen in the US
YesterdayOne Person Killed, 7 Injured in Shooting Near University Campus in US
YesterdayIran Set to Cooperate With Islamic World in Nuclear Development - Spokeperson
YesterdaySupermarkets in UK Reportedly Use Cardboard Cut-Outs to Disguise Empty Shelves
Yesterday5.0 Magnitude Earthquake Shakes La Palma as Spanish Island Territory Reels From Volcano Eruption
YesterdayJeremy Clarkson Slams 'F***ing Government' at Farming Awards Ceremony - Video
YesterdayPakistan Denies Reports of Preparing to Sign Airspace Agreement With US
YesterdayWatch Massive Migrant Caravan Push North Into Mexico as US Reports Record Apprehensions
YesterdayWatch Iranian Governor Getting Slapped on Stage During His Inauguration
YesterdayAssange's Extradition Incomprehensible After Revelations CIA Plotted to Kill Him, Fiancée Says
YesterdayUnderwater Treasure May Point to Location of Long-Gone 'Island of Gold' Empire