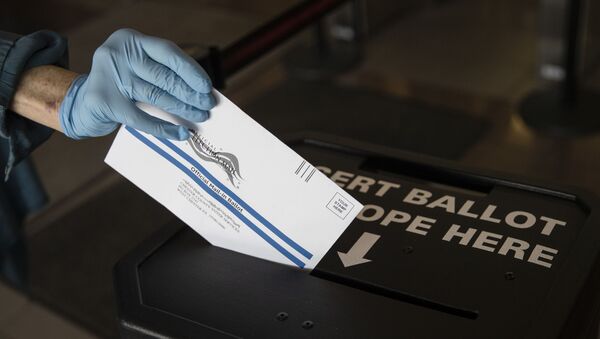 Critics have been slamming President Donald Trump for refusing to provide funding for the US Postal Service (USPS) in the coronavirus relief deal and potentially “sabotaging” mail-in voting – a procedure the current incumbent deems potentially fraught with election fraud.

Donald Trump has reiterated his stance on mail-in voting in the upcoming November presidential elections in the US, saying he backs actions being taken by Louis DeJoy, the 75th Postmaster General of the United States, and that additional funds will not be designated for universal voting by mail.

WATCH: “Universal mail-in voting is going to be catastrophic, it’s going to make our country a laughing stock all over the world.”

.@realDonaldTrump says absentee voting is “good” and mail-in voting is “very bad” during a presser in Bedminster, NJ #SavetheUSPS pic.twitter.com/YROZREvMQO

​During a news conference on Saturday at his Bedminster, New Jersey, country club, Trump said that while absentee voting was good, vote-by-mail was “very bad” and subject to election fraud.

“Universal mail-in voting is going to be catastrophic, it’s going to make our country a laughing stock all over the world,” Trump said.

The US President also said that it could take “months” to determine the result of November’s elections, and blamed Democrats for not approving “proper funding” for the postal service.

When asked about reports that sorting machines were being removed at some postal service locations, potentially impacting the efficient processing of mail, Trump deflected, suggesting such questions be directed to the Postmaster General Louis DeJoy.

“Well, you’ll have to ask him. I know this: he’s a very efficient operator, a very good operator.”

Previously, Democrats, who have demanded large amounts of funding for the Postal Service, including to help ensure the November vote, accused Donald Trump and the postmaster general of trying to “actively kneecap” the USPS.

Trump said at a press conference on 12 August he would not sign off on either the $25 billion in emergency funds for the US Postal Service, or the $3.5 billion in election assistance to help states that had been pressed for by the Democrats, in line with a federal COVID-19 relief bill, reported Fox Business.

Trump this morning why he won’t fund US Postal Service. “Now they need that money in order to make the post office work so it can take all of these millions and millions of ballots ... But if they don’t get those two items that means you can’t have universal mail-in voting.” pic.twitter.com/73NBmSnoNC

​This comes amid warnings to 46 US states and Washington DC from the US Postal Service that ballots might not be delivered on time for the November election, according to a recently-released letter by US Postal Service (USPS) executive vice president Thomas J. Marshall.

Earlier, on 7 August, US Postmaster General Louis DeJoy announced organisational changes at the USPS, ostensibly tasked with cost-reducing, but deplored by critics as potentially jeopardising states’ plans to increase the use of mail-in ballots amid the health crisis.

The Postal Service’s inspector general was quoted on Friday as saying an investigation has been opened into complaints by Democrats about cuts to mail services that have slowed the delivery of mail.

“The Postal Service should not make changes that slow down the mail or in any way compromise service for veterans, small businesses, rural communities, seniors, and millions of Americans who rely on the mail -- including significant numbers of people who will be relying on the Postal Service to exercise their right to vote,” wrote Speaker of the US House of Representatives Nansy Pelosi and five other top Democrats.