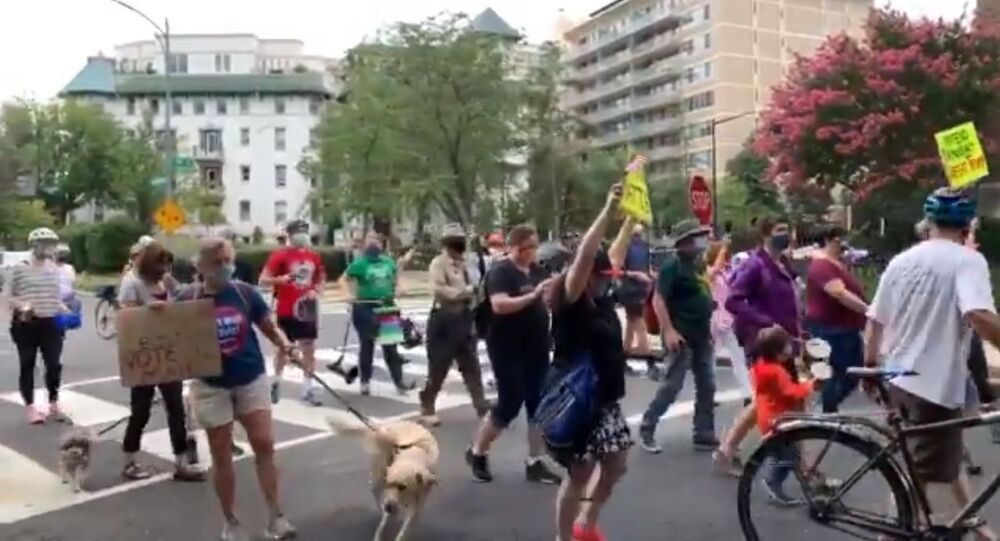 Amid widespread controversy over accusations by US President Trump that mail-in voting will expand voter fraud in the November elections this year, protestors came out to oppose reforms to the post-service sanctioned by the Postmaster General.

Demonstrators in opposition to recent decisions made by Postmaster General Louis DeJoy held a protest outside his home in Washington, D.C., on Saturday, demanding support for the US Postal Service (USPS).

Shut Down DC protestors kicked off the demo at Kalorama Park in Adams Morgan before marching toward DeJoy's home in northwest D.C., and ended outside the condo in order to give a "wake-up call" to the postal head.

This morning we stopped by @USPS Post Master General Louis DeJoy's house to give him a wake up call. We need the postal service to #DeliverDemocracy this fall. Stop the attack on our mail! #USPSisEssential #USPS2020VOTE https://t.co/a8KmFt5hIU

Protesters are making their way to the Postmaster General’s house for what they call a “wake-up call” pic.twitter.com/swK0CEboPv

Outside the postmaster general’s house early this morning!! pic.twitter.com/dzDC4V2dPo

​DeJoy, who is a former supply-chain CEO and contributor to President Trump and the Republican Party, was elevated to the position at the end of May.

In August, he announced large scale reforms and restructuring to the Postal Service would take place, which led to 20 postal executives being reassigned or removed.

The operation of the nation's mail service being reduced has highlighted questions of mail-in voting fraud during the November general election and attempts to reduce voter turnout.

DeJoy, however, reportedly ordered the decommissioning of 671 USPS letter sorting machines, which help in the efficient delivery of mail, given that a single machine has the capacity to sort 35,000 letters an hour.

The Postal Service has also warned states that it will be unable to handle a massive influx of mail-in ballots over the election period.

The structural changes that DeJoy introduced will be reviewed by the USPS's inspector general, a representative told The Hill Friday.

“We are in receipt of a congressional request and are conducting a body of work to address the concerns raised,” said Agapi Doulaveris of the inspector general’s office.

President Trump initially rejected increased funding to the USPS as it would increase mail-in voting, which he claims would lead to widespread voted fraud in the Democrats favour. He later said on Friday that he would support further funding for the service.