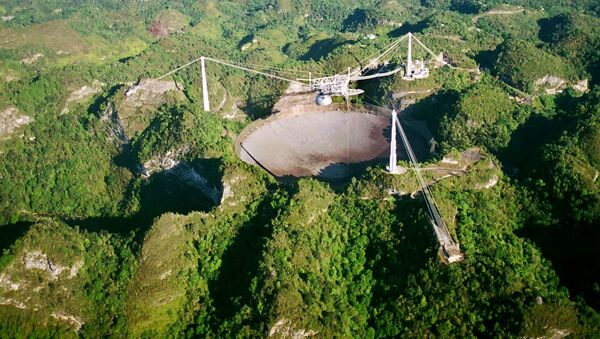 Aleksandra Serebriakova
Moscow-based Sputnik correspondent specializing in foreign affairs.
All materialsWrite to the author
Arecibo Observatory, a giant radio telescope located in Puerto Rico, is well-known for being the epicentre of the tracking of potentially hazardous near-Earth asteroids. The team behind its operation has also searched for signs of extra-terrestrial life for decades now, but to no avail so far.

A cryptic overnight accident has led to breakage and a forced stop of the Puerto Rico’s iconic Arecibo Observatory, after an auxiliary cable above the telescope broke down and crashed into its reflector panels, creating a giant 30-meter-long hole, the University of Central Florida, which operates the facility, revealed in a statement this week.

During a Friday news conference, Arecibo Observatory director Francisco Cordova said that 250 of the telescope’s reflector panels had sustained damage, but the reason behind the cable’s crash remains unclear, with the team as of yet to fully assess the extent of the catastrophe and determine the cost for the giant’s repair.

The accident occurred on 10 August at around 2:45 am, when the cable, supporting a platform above the radio disk, cracked and then slashed through the dish, creating a massive hole. Several support cables underneath the disk have also been damaged, Cordova said.

“We have a team of experts assessing the situation,” Cordova initially revealed on Monday. “Our focus is on assuring the safety of our staff, protecting the facilities and equipment, and restoring the facility to full operations as soon as possible, so it can continue to assist scientists around the world.”

The 300m Arecibo Observatory sustained a gash from a fallen steel cable.😬
The radio telescope is world famous for SETI, Near-Earth Asteroid detection, planetary/pulsar science + other radio studies for 60 yrs! Sadly underfunded these days. Hopefully not too difficult to repair.. pic.twitter.com/AltLMkrCdm

Arecibo Observatory has been operating since 1963, becoming the world’s largest telescope at the time of its opening. Eventually, it turned out to be a home to a team running the Planetary Radar Project, supported by NASA’s Near-Earth Object tracking system, which is set to study potentially hazardous intruders to our planet. The telescope has also played an important role in attempting to contact alien civilisations through a search for extraterrestrial intelligence (SETI) in the early 1970s. In 1974, the telescope was used by astronomers to send a binary-coded message to distant stars, thousands of light-years away from us, in a bid to prove that we are not alone in this universe. The message has gone unanswered so far.

However, aliens might have to wait for now, as all operations at the observatory have been temporarily suspended until full repairs are carried out.