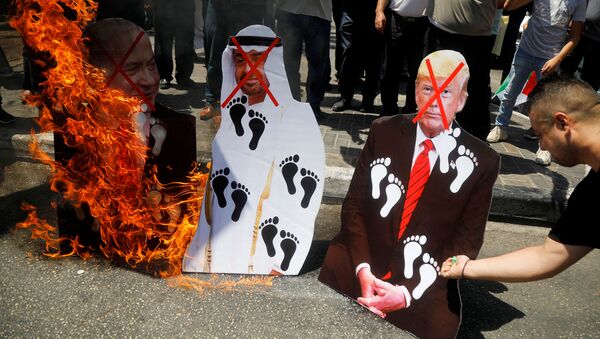 The United Arab Emirates is set to become the first Arab nation in a quarter of a century to officially normalise relations with Israel. The Israeli prime minister, Benyamin Netanyahu, clinched the deal at the cost of withdrawing his plans to seize parts of the West Bank.

Iran’s President Hassan Rouhani has fiercely denounced the United Arab Emirates’ decision to establish full diplomatic ties with Israel as a “huge mistake” and a betrayal of the Arab world.

In a televised speech on Saturday, Rouhani warned the Emirates against allowing Israel a “foothold” in the Middle East.

“They (the UAE) have committed a huge mistake, a treacherous act,” Rouhani said. “We hope they will realise this and abandon this wrong path.”

He added: “Why then did it happen now? If it weren’t a wrong deal, why was it then announced in a third country, in America? So a gentleman in Washington wins votes, you betray your country, your people, Muslims and the Arab world?”

On Thursday, US President Donald Trump announced that Israel and the Emirates would establish full diplomatic relations in a US-brokered deal, which would see Israel halt its long-standing plans to annex parts of the West Bank.

If the deal is signed, the UAE will be the third Arab country, after Egypt in 1979 and Jordan in 1994, to establish diplomatic ties with Israel. It caps several years of growing behind-the-scenes cooperation between Israel and Sunni monarchies of the Gulf to counterbalance Shia Iran as an ambitious regional power broker.

The European Union, Egypt, Bahrain and Oman, have welcomed the agreement, which was strongly condemned by all Palestinian factions and Turkey. Ankara (which has active diplomatic relations with Israel) has threatened to suspend its ties with the Emirates and recall its envoy.

Russia and China have praised the deal for the halt on West Bank annexation it proposes.

Rouhani’s statement came hours after the UN Security Council rejected a US resolution to extend an arms embargo on Iran. The ban, imposed in 2007, is due to expire in October.

The United States was the only member of the 15-strong council, alongside the Dominican Republican, to vote in favour of the resolution.