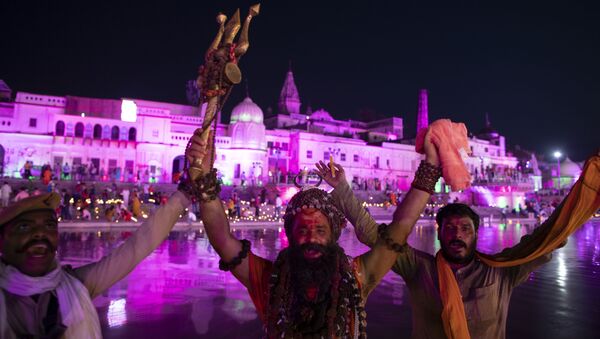 © AP Photo / Rajesh Kumar Singh
Subscribe
New Delhi (Sputnik): Indian Prime Minister Narendra Modi on Wednesday laid the foundation stone for a grand temple dedicated to Lord Ram, incarnation of the all-powerful among the Hindu trinity, Lord Vishnu in Ayodhya, believed to be his birthplace. With it, a five-century dispute over the purported birthplace of Lord Ram has come to an end.

The grand temple dedicated to Lord Ram in Ayodhya will be a symbol of integration of the country, said Indian Prime Minister Narendra Modi. Modi was addressing an invited audience after performing the groundbreaking ceremony for the construction of the iconic temple, at the site believed to be the birthplace of the hugely revered deity, Lord Ram.

“Ram Mandir will turn into a symbol to integrate India. It will be a unique gift to the world from justice-loving India", said Modi.

The prime minister expressed hope the temple would transform the region's economy, attracting huge numbers of visitors from around the world.

Mohan Bhagwat, Chief of Rastriya Swayamsevak Sangh, the ideological mentor of India’s ruling Bharatiya Janata Party (BJP) said it would not be just another temple, but "a symbol of unity of mankind".

Modi earlier performed the groundbreaking ceremony for the iconic temple along the banks of the River Saryu, in the presence of Uttar Pradesh Governor Anandiben Patel, ascetic Chief Yogi Adityanath, and about 140 spiritual leaders belonging to 36 Hindu sects from all over India.

The design of the planned Ram Temple was made by architect Chandrakant Sompura, who hails from a family of temple architects.

The grand three-storey stone structure is on a raised platform with multiple turrets, pillars, and domes. It will be 161 feet tall and almost double the size of what was originally planned.

The groundbreaking was the culmination of a 500-year-old dispute between Hindus and Muslims. Hindus claim Mughal ruler Babur demolished the Ram Temple and constructed a mosque during the 16th century.

Hindu zealots razed the mosque to the ground on 6 December 1992, sparking one of the worst communal riots in post-independence India.

The dispute, considered to be the longest litigation in the country, lingered in various courts since 1950, until it came to the Supreme Court of India in 2011 for final adjudication. The apex court delivered its judgement on 9 November 2019, handing over ownership of the disputed land to Hindus, while ordering a suitable piece of land for Muslims to construct a mosque.