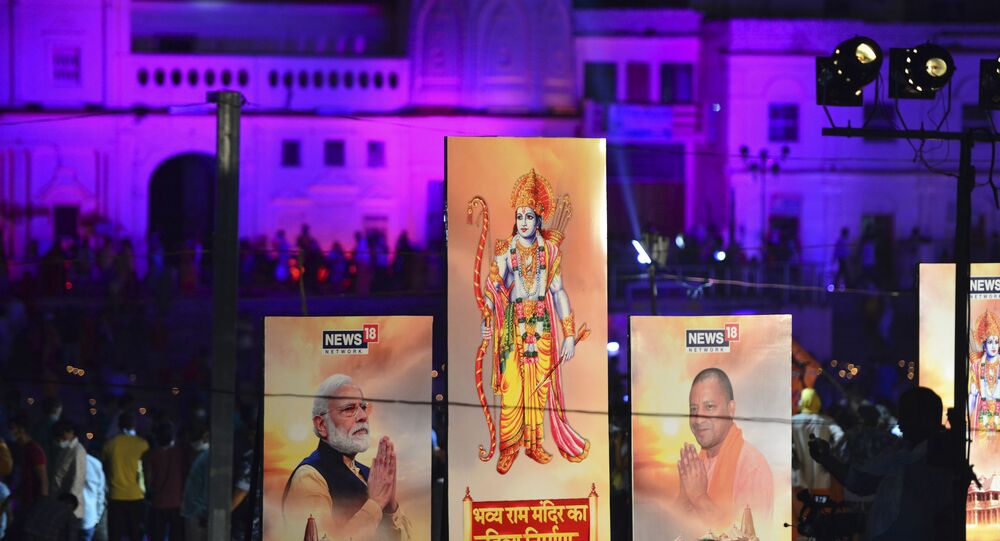 New Delhi (Sputnik): The settlement of a centuries-long battle between Hindus and Muslims over a piece of land believed to be the birthplace of Lord Ram, by the country's apex court paved the way for a shrine dedicated to the hugely revered idol.

Indian Prime Minister Narendra Modi has laid the foundation of a grand temple dedicated to Lord Ram, incarnation of Lord Vishnu of the trinity of Hindu pantheon in Ayodhya, 135 kilometres east of Lucknow, the capital of Uttar Pradesh.

Upon arrival in Ayodhya, Modi first paid obeisance at a temple dedicated to the monkey-god Hanuman, considered to be a close companion of Lord Ram at the city's Hanumangari Temple.

The construction of the temple is being managed by a trust set up by the federal government on the orders of the Supreme Court of India. It is estimated that the temple and its surrounding complex will be completed in three years.

The design of the planned Ram Temple was released on Tuesday (4 August), a day before the groundbreaking ceremony. It was designed by architect Chandrakant Sompura, who comes from a family of temple architects.

The grand three-storey stone structure on a raised platform has multiple turrets, pillars, and domes. It will be 161 feet tall and almost double the size of what was originally planned.

The groundbreaking was the culmination of a centuries-long dispute between Hindus and Muslims over a piece of land. Hindus claim that Mughal ruler Babur demolished the Ram Temple and constructed a mosque there.

Hindu zealots razed the 16th century mosque to the ground on 6 December 1992, sparking one of the worst communal riots in independent India.

The dispute, considered to be the longest litigation in the country, lingered in various courts since 1950 until it came to the Supreme Court of India in 2011. The apex court delivered its judgement on 9 November 2019 handing over ownership of the disputed land to Hindus, while ordering a suitable piece of land for Muslims to construct a mosque.