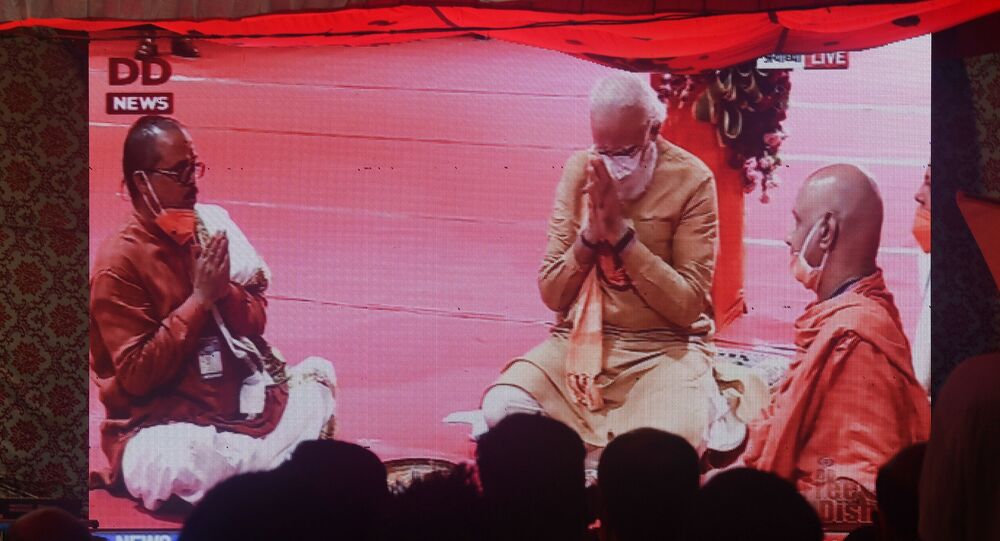 New Delhi (Sputnik): The journey by Hindu hardliners to construct a Ram Temple in Ayodhya has been a winding one, witnessing drawn out litigation and communal violence.

Prime Minister Narendra Modi was merely a worker in the initial struggle for the Ram Temple in 1991 along with then-Bharatiya Janata Party President (BJP) Lal Krishna Advani, known as the mascot and architect of the movement.

Almost three decades after joining the movement as a young volunteer from Gujarat with political aspirations, Modi laid the first silver brick for the foundation of a grand Ram Temple in the Hindi heartland, Ayodhya - considered to be the birthplace of the revered Hindu god Ram and where the Mughal-era Babri Mosque once stood.

The Ram Temple will set the stage for Modi in the 2024 elections, a year before the grand temple is expected to be completed and inaugurated in a mega ceremony.

Building a grand temple on a centuries-old disputed piece of land in the small Indian town of Ayodhya has been a staple promise in the BJP's election manifestos for the last four decades.

Harshvardhan Tripathi, a political analyst, says that for a long time many believed the issue was being drawn out to be used as political leverage, playing on voters' emotions. The Supreme Court ruling last November, however, put the final nail in the coffin and boosted the party's ideology via the judiciary system.

Rashtriya Swayamsewak Sangh (RSS), a cultural and nationalist organisation that is also the parent organisation of the BJP, is accused of exercising communal ideology. "The Supreme Court’s verdict in favour of Hindus is the validation of the party’s ideology, which is the formation of Ram Rajya", Tripathi underlined.

Ram Rajya means the "Kingdom of God" that envisages a society in which virtue, morality, and justice are the core ideals.

Late BJP politician Pramod Mahajan and Modi were considered to be the key forces in organising a Rath Yatra (chariot procession) in 1990 along with then-BJP President Advani.

As Indian Prime Minister Narendra Modi to attend ground breaking ceremony for #RamMandir in #Ayodhya here is pic of 1991 when @narendramodi was sitting with a crowd of people as volunteer at a #VHP rally at the Delhi Boat Club.@SputnikInt pic.twitter.com/WMcjkEcXjN

​Modi was the charioteer for the Gujarat leg of Rath Yatra, infamous for creating smouldering tensions between India's Hindu and Muslim communities. This procession triggered massive riots between the two communities as it proceeded through the states.

Tripathi states that Modi, who was one of the key initiators and strategy-makers of the 1990 chariot procession, will consolidate the Hindu voter base for the saffron party in the Hindu-majority nation and it will be considered a landmark achievement of his career.

“When India and Pakistan were separated in 1947, Pakistan established itself as a Muslim nation whereas India is still looking identification. Under Modi regime we are now moving towards Ram Rajya which has been integral ideology of Hindutva,” Tripathi explained.

BJP is revisiting Hindu culture all over again, he adds.

Modi, as well as the BJP, has gained the trust of people by fulfilling two key promises in its election manifesto: building a magnificent temple for Ram Lalla (the infant god Ram) and the integration of Kashmir with India.

The BJP government revoked the special status of Jammu and Kashmir on 5 August 2019 and will be celebrating the first anniversary of the move on Wednesday. The anniversary coincides with the groundbreaking ceremony in Ayodhya on 5 August 2020, a date which organisers said was astrologically auspicious for Hindus.

© AFP 2020 / SANJAY KANOJIA
Ayodhya’s Ram Temple: Decades-long Hindu-Muslim Fight Over A Hectare Land That Shaped Indian Polity
The date has become politically significant and a coincidence hard to miss for the BJP which has fulfilled its two pledges.

"The BJP has built a strong foundation for trust with its followers for fulfilling the promises which usually remain as decorative agendas to win elections. He has established Hindu faith unlike Congress where there is a trust deficit", he adds.