Anders Breivik Trying to Sell His Story for $10 Mln 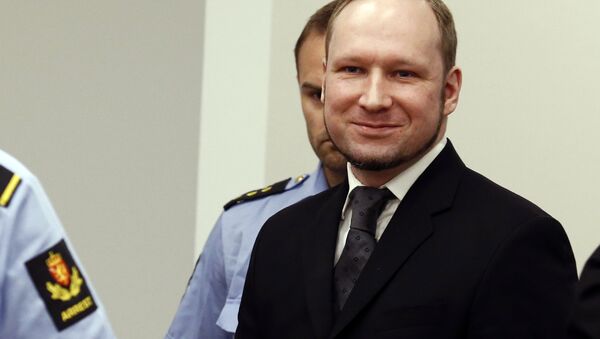 © AFP 2021 / POOL / HEIKO JUNGE
Subscribe
41-year-old Anders Breivik, who killed a total of 77 people, bombing the Norwegian government quarter in Oslo and attacking the Norwegian Labour Party's summer camp on Utøya Island, is trying to utilise his country's laws and make a fortune on his story.

According to author and journalist Christoph Andersson, a specialist on right-wing extremism and one of the recipients of the letter, Breivik estimated the value of his story at SEK 86 million (nearly $10 million). Breivik's lawyer has confirmed to Andersson that the letter is genuine.

Andersson stressed that Breivik has a trump card in his hand, because the Norwegian principle of openness and availability of information doesn't apply to the judiciary. This means that access to preliminary investigation material and interrogations must be approved by the terrorist himself.

In other countries, such as Sweden, it would be a violation of the constitution to let convicted murderers decide who is allowed to read their preliminary investigations, Andersson stressed.

In 2011, Anders Behring Breivik became the deadliest mass murderer in Norway's history, pulling off a dual attack against Oslo's government quarter and the Labour Youth Camp on Utøya Island, killing 77 and wounding over 150. Before the attacks, he disseminated a 1,500-page manifesto under the pseudonym Andrew Berwick, in which he blamed feminism for the “cultural suicide of Europe”, opposed Islam and called for the mass deportation of Muslims from Europe.

Brevik was sentenced to a “life imprisonment” of 21 years, Norway's toughest penalty. 41-year-old Breivik is currently is Skien prison, 140 kilometres south from Oslo. While in prison, he switched his legal name to Fjotolf Hansen and disavowed his “fascist, national socialist and ethno-nationalist” ideology.

However, Breivik's influence was alleged in the case of gunman Philip Manshaus, who in June 2020 was sentenced to 21 years in prison for killing his Chinese-born teenage step-sister and opening fire at the al-Noor Islamic Centre in Baerum. While Manshaus admittedly intended “to kill as many Muslims as possible”, he was overpowered before police arrived. In court Manshaus was unrepentant and voiced admiration for the Christchurch, New Zealand killer, Brenton Tarrant, and cited Adolf Hitler and Breivik as role models. He also spoke of the “genocide of the European people” and called the Holocaust a myth.