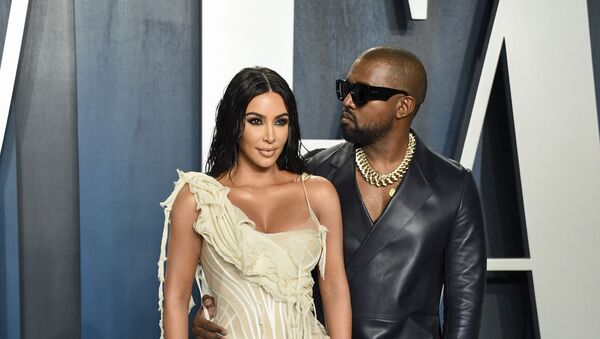 © AP Photo / Evan Agostini
Subscribe
Kanye West has hinted at a divorce with his wife of six years during a chaotic campaign rally on Sunday, where he revealed that they had considered aborting their daughter. Kanye’s admission has reportedly ignited a row with Kim, who he claimed had called a doctor to "lock him up".

A celebrity break-up is looming as Kanye West says he has been trying to divorce his wife Kim Kardashian.

In a Twitter rant on Tuesday night, Kanye appeared to imply that Kim had cheated on him with rapper Meek Mill.

“I been trying to get divorced since Kim met with Meek at the Warldolf [sic] for ‘prison reform’,” he wrote, apparently referring to the Criminal Justice Reform Summit in Los Angeles, where both Kim Kardashian and Meek Mill spoke in November 2018.

A source told celebrity gossip site AceShowbiz in April that Mill, who has praised Kim for their commitment to prison reform, had an affair with the Keeping Up with the Kardashians star.

Kanye also tweeted that his wife had tried to “fly in with 2 doctors to 51/50” him, referring to the California legal code for the temporary involuntary detention of an individual who presents a danger to themselves or others as a result of mental illness.

​The billionaire sneaker tycoon, who is running for US president, claimed on Monday that Kim Kardashian had tried to 'lock him up' after a chaotic campaign launch over the weekend.

“Kim was trying to fly to Wyoming with a doctor to lock me up like on the movie Get Out because I cried about saving my daughters life yesterday,” he wrote in a tweet, which has also been removed.

The comment came the day after Kanye's first political rally, where he revealed that he and Kim had considered aborting their daughter North. “Even if my wife wants to divorce me after this speech, she brought North into the world even when I didn’t want to,” he added, saying that he would be “at peace” with the decision.

The two have been married since May 2014 and have four children together: daughter North, 7, son Saint, 4, daughter Chicago, 2, and son Psalm, 1.

Kanye’s revelation about their private abortion discussions have reportedly sparked concerns from Kim Kardashian, who is said to be “shocked” and “stunned”.

TMZ broke this month that Kanye was going through a “serious bout” of bipolar disorder which has worried his family and friends. The rapper, who has yet to confirm or deny the news, has previously acknowledged his diagnosis but said that he does not take psychiatric medication.

000000
Popular comments
Who the f*ck cares about their marriage? Kanye lost the plot some time ago having a god complex...