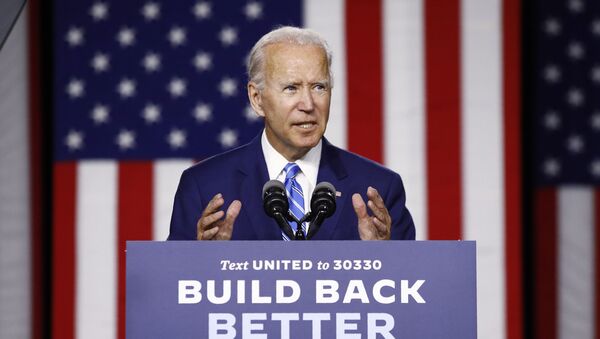 The presumptive Democratic presidential nominee, Joe Biden, during a speech in Wilmington, Delaware, announced his major $2 trillion climate change plan that aims to boost the development of sustainable energy and create more jobs.

Outlining his contrast to incumbent President Donald Trump, who is not known to accept the reality of the climate crisis, Biden said that he thinks of the word "jobs" when thinking of climate change.

When Donald Trump thinks about climate change, all he can muster is one word: “hoax.”

When I think about climate change, I think of a word as well: “jobs.”

​According to the announced plan, Biden, if elected, aims to create jobs by building out "modern infrastructure", developing clean energy and boosting the US auto industry.

"Biden will create millions of good, union jobs building and upgrading a cleaner, safer, stronger infrastructure – including smart roads, water systems, municipal transit networks, schools, airports, rail, ferries, ports, and universal broadband access – for all Americans, whether they live in rural or urban areas", according to the plan.

When presenting the plan, Biden implied that it will resolve racial injustice and correct economic disparity, promising 40 percent of his proposed investments to communities of color.

“This is an area of incredible opportunity for growth in our country but we have to make sure that the first people who benefit from this are the people who were worst hurt by it historically in the last century by the structural disparities that exist,” Biden said.

Feedback on the Biden Plan

Trump, who will face Biden in November's presidential race, lambasted the proposed plan by asserting that "Biden has gone radical left".

"There's never been a time when two candidates were so different", Trump stated, cited by Fox News.

The president's remarks were echoed by his campaign staff, who labeled the plan a "socialist manifesto" and expressed concern that it will kill American energy industry jobs.

Joe Biden could act NOW to stop his supporters from trying to kill these good-paying union pipeline jobs.

Instead, he's preparing to sacrifice them on the altar of the Green New Deal. https://t.co/z7kzDkT66e

​Some praised the plan, however, as "ambitious" and endorsed it, encouraging Biden to "run aggressively" on this agenda, including Evan Weber, co-founder and political director of the youth-led Sunrise Movement against climate change.

This was always the major narrative intervention at the heart of @sunrisemvmt's strategy: when people think climate change, they need to think "jobs," & if we achieve that we win.

If @JoeBiden runs aggressively on this through Nov 3, we can defeat Trump & maybe save society, too https://t.co/1DWfi9miiA

​Laura Berry, director of research and policy for The Climate Mobilization, demanded more from the plan, pointing at the lack of a decarbonization agenda within the plan.

"The last twelve months were the hottest we've ever experienced—an average of 1.3ºC above pre-industrial temperatures. Vice President Biden's plan, while a clear departure from the market-based solutions of the past two decades, ultimately fails to reckon with the massive climate risks we face within the next decade," Berry said, cited by Common Dreams. "Eliminating greenhouse gas emissions from the power sector would only cut domestic emissions by 27%—but we need to be eliminating emissions across the economy as quickly as possible."