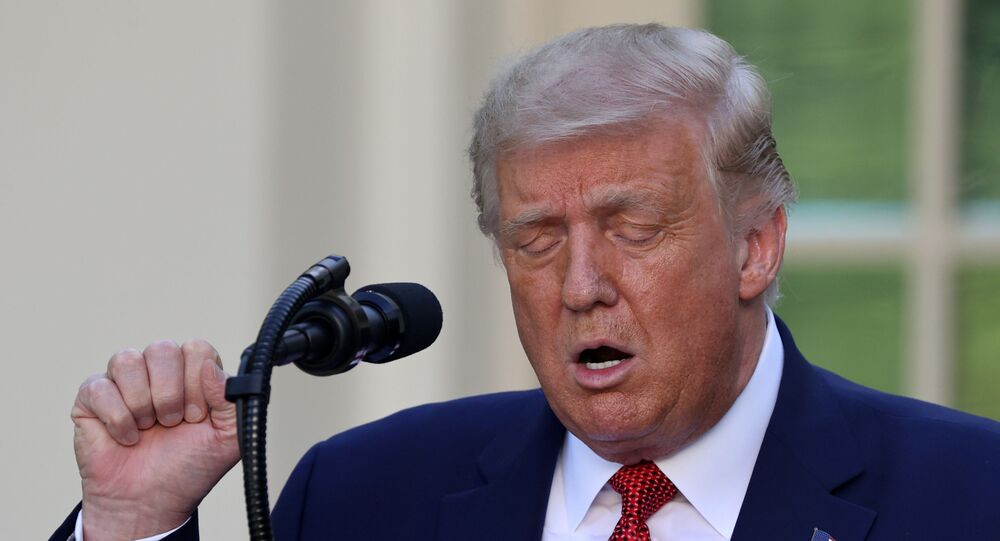 Viewers of US President Donald Trump’s news conference began live tweeting their confusion Tuesday evening once the president began to veer off-course from announcing a new policy and appeared to enter into rally mode.

Trump announced Tuesday that he had signed the Autonomy Act, which sanctions Chinese officials related to the new national security law in Hong Kong, to “hold China accountable for its repressive actions.”

"Hong Kong will now be treated the same as mainland China. No special privileges, no special economic treatment and no export of sensitive technologies,” he declared.

However, he did not stick to solely that topic for long, and soon went into bashing his current political rival: former Vice President and Democratic presidential nominee Joe Biden.

“Joe Biden and President Obama freely allowed China to pillage our factories, plunder our communities and steal our most precious secrets,” he said.

"Joe Biden and President Obama freely allowed China to pillage our factories, plunder our communities, and steal our most precious secrets."

I hope someone in the Rose Garden asks him about this, & his administration's ongoing violations of the #HatchAct & use of official @WhiteHouse duties for the explicit benefit of the Trump re-election campaign. @Yamiche @jonkarl @kaitlancollins https://t.co/3yaAqh0iu7 https://t.co/qQO6A4UX8g

Not for nothing, but Trump using the Rose Garden to give a campaign speech assailing Biden is definitely illegal and his campaign owes the taxpayers a lot of money for this event.

I’d be curious to see if the president would respond to a shouted question right about now.

“Where is Hunter?” Trump asked rhetorically, referring to Hunter Biden, the son of his political foe and a former board member at Burisma Holdings, a Ukrainian natural gas company.

“You all know about Burisma, but nothing happens,” he argued.

CNN, MSNBC and other stations then pulled their broadcasts of the US president’s news conference.

This "press conference" basically ends - assuming it ends- with "I'm Joe Biden and I endorse this message," right?

After a 50-minute plus monologue and answering just a few questions, that's it from @POTUS in the Rose Garden, who concludes with a promise to take care of #DACA and then returns to the Oval Office. pic.twitter.com/eyta2uIslg

This was billed as a press conference. Mostly it was campaign speech. 1/3 of questions were asked by OAN.

Trump exits after his anti-Biden monologue and a few questions.

Aside from the appropriateness of doing a rally speech against his opponent from the White House grounds, that was a wildly dishonest performance.

Tuesday was an eventful day for the US president, who scolded CBS News senior investigative correspondent Catherine Herridge during an interview that same day.

At one point, Herridge asked, “Why are African Americans still dying at the hands of law enforcement?” Trump shied away from the question and declared, “So are white people.”